"Palin’s speech distinguished itself from the others as she discussed her son Track Palin’s military service.
“Sarah Palin’s speech really stuck out because she’s very colorful,” O’Toole said. “She emphasized the need to legitimize military degrees so that veterans are able to get better jobs that they are more than qualified enough to do.”"

Sarah Palin to Obama: ISIS Wants Your Head but Christians Praying for You

(Another leftist site stopped in their tracks)

"White Nationalists, Sarah Palin, and the Slow Death of the Right-Wing Fringe"


"Amazingly, even Sarah Palin veered away from her usual script, giving a thoughtful speech about the challenges facing veterans when they return home. " America hands over her sons and her daughters in service with the promise that they're going to be taken care of," she said. "Well we, their mothers and their fathers and their husbands and their wives, we're here to collect on the promises made. We can't wait for D.C. to fix their bureaucratic blunders. This bureaucracy is killing our vets." Then, to everyone's surprise, she proposed a series of very reasonable ways Congress could address the issue."

NEWSWEEK     LINK
(Considering it's Newsweek a positive report except Newsweek finds this from Palin's speech to criticize;"The Middle East is a tinderbox, and it is coming apart at the seams" But Biden's OK)

(An actual balanced review from the left)


"Palin was last, and the only speaker to bring the crowd to its feet without saying a word. "


Palin Addresses Vet Issues At CPAC: "The Only Thing Standing Between Us And Savages Is The Red, White And Blue"


Obama to blame for ISIS rise, kill them like Nazis - Palin

Palin: ‘Only Thing Standing Between Us and Savages Is the Red, White, and Blue’


Palin: "This Bureaucracy Is Killing Our Vets"


SARAH PALIN ON ISIS: WAKE UP, PRESIDENT! ‘WE WILL NEVER SUBMIT’ TO EVIL OF RADICAL ISLAM

SARAH PALIN ON ISIS: WAKE UP, PRESIDENT! ‘WE WILL NEVER SUBMIT’ TO EVIL OF RADICAL ISLAM


BLOOMBERG;   LINK (includes ludicrous statement;
"(Palin) now selling "I Stand With Bibi" T-shirts for $35 to imply she is pro-Israel. " If anyone is "pro-Israel" it is Palin. Talev is a buffoon.

(AS NEAR A GOOD REVIEW AS IS POSSIBLE THERE) 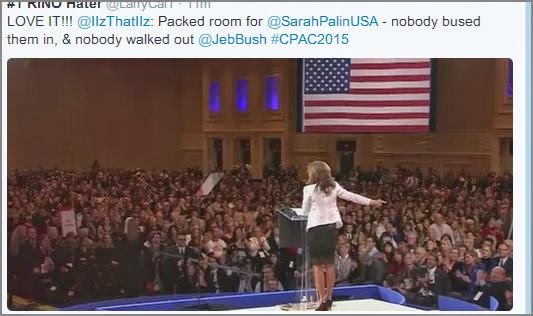 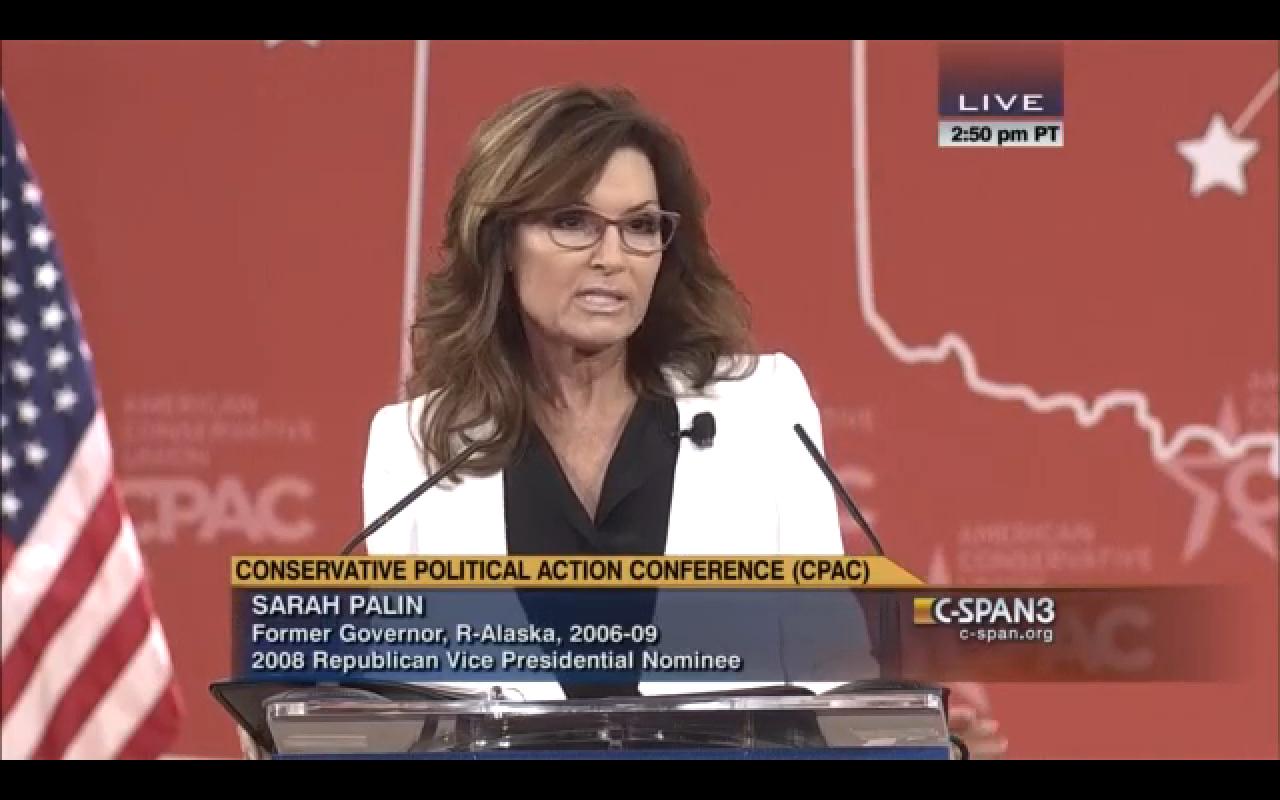 Mr. ‏@totalBlazemove  58s58 seconds ago
Hey @SarahPalinUSA, you made the 20 hour bus ride from Minnesota worth it to hear you speak tonight. 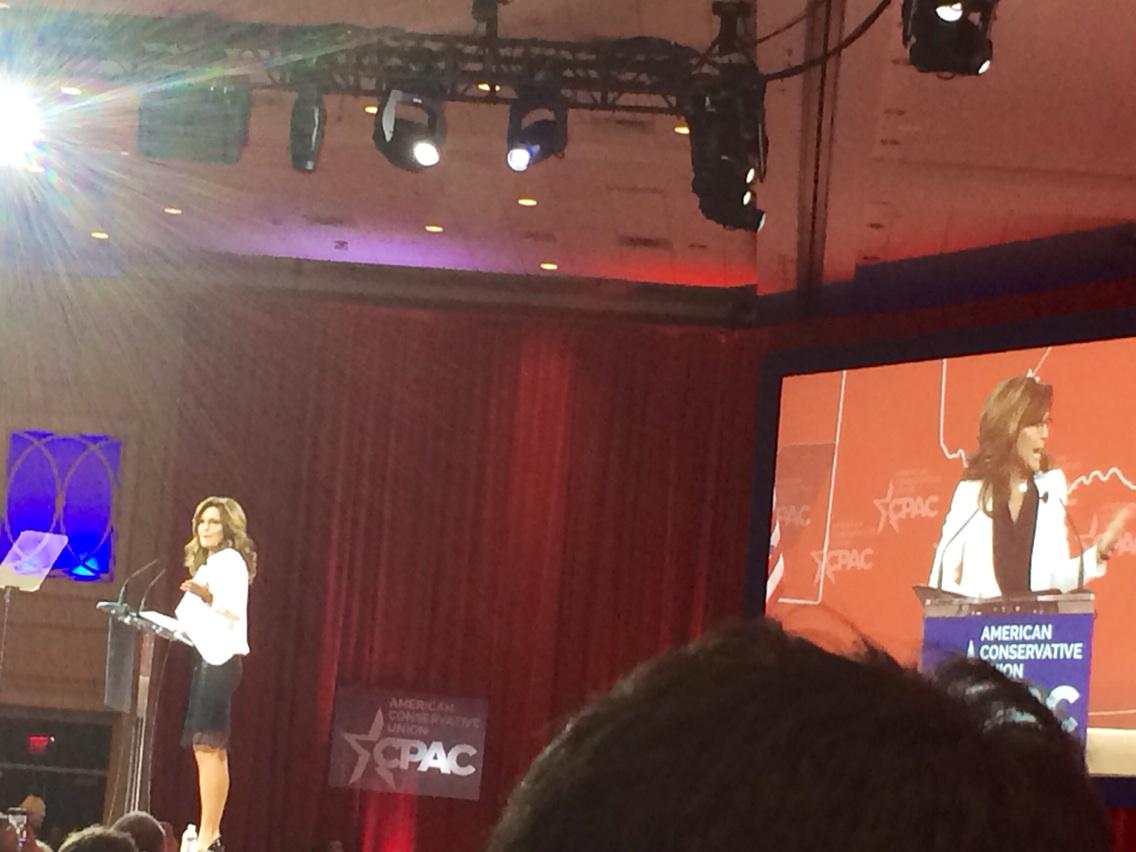 Progressive Southern ‏@Progress_South  2m2 minutes ago
@SarahPalinUSA say none have done more than this generation for the war against terror. #CPAC2015 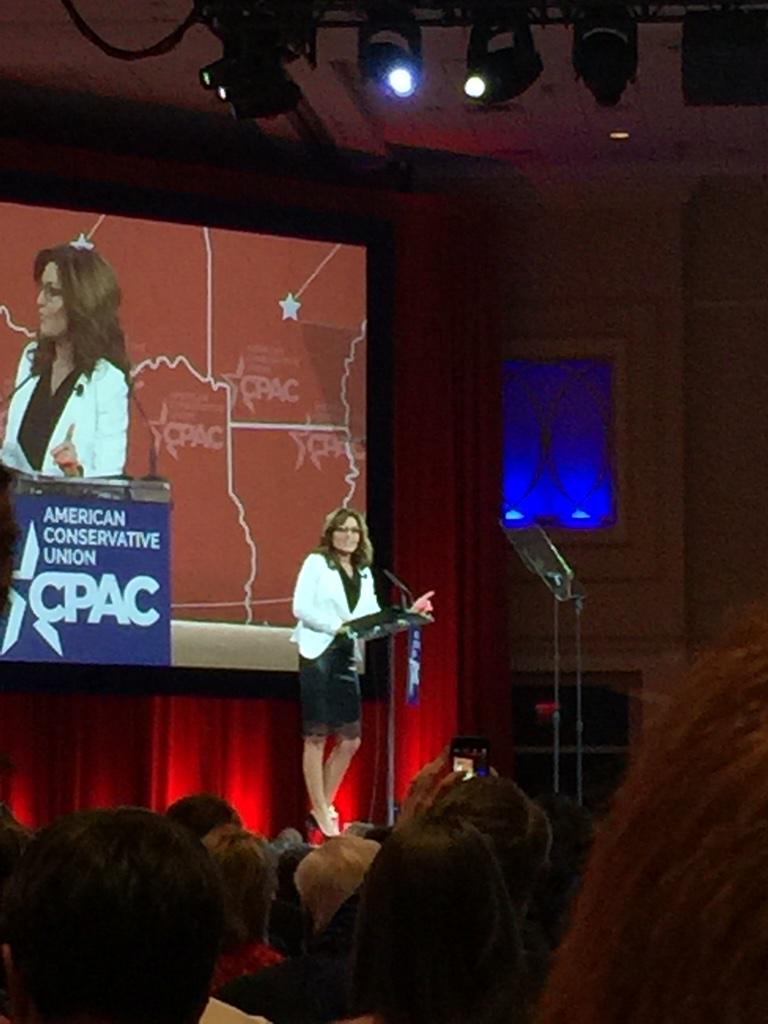 Andres Taborda ‏@AndresTaborda_  2m2 minutes ago
There she is. @SarahPalinUSA! #CPAC2015 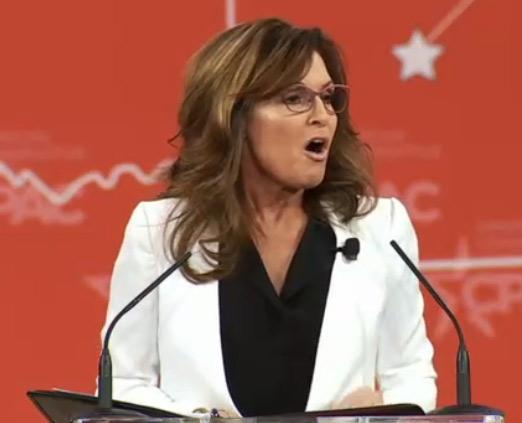 50 Shades of Dee ‏@DeeInHouston  1m1 minute ago
Say what you will about @SarahPalinUSA - She cares about the military & is fighting for them. #CPAC2015

ANM News ‏@ANMNews_  1m1 minute ago
@SarahPalinUSA "Instead of allowing illegal immigrants to push to the front of the line, our vets should be first in line" #CPAC2015 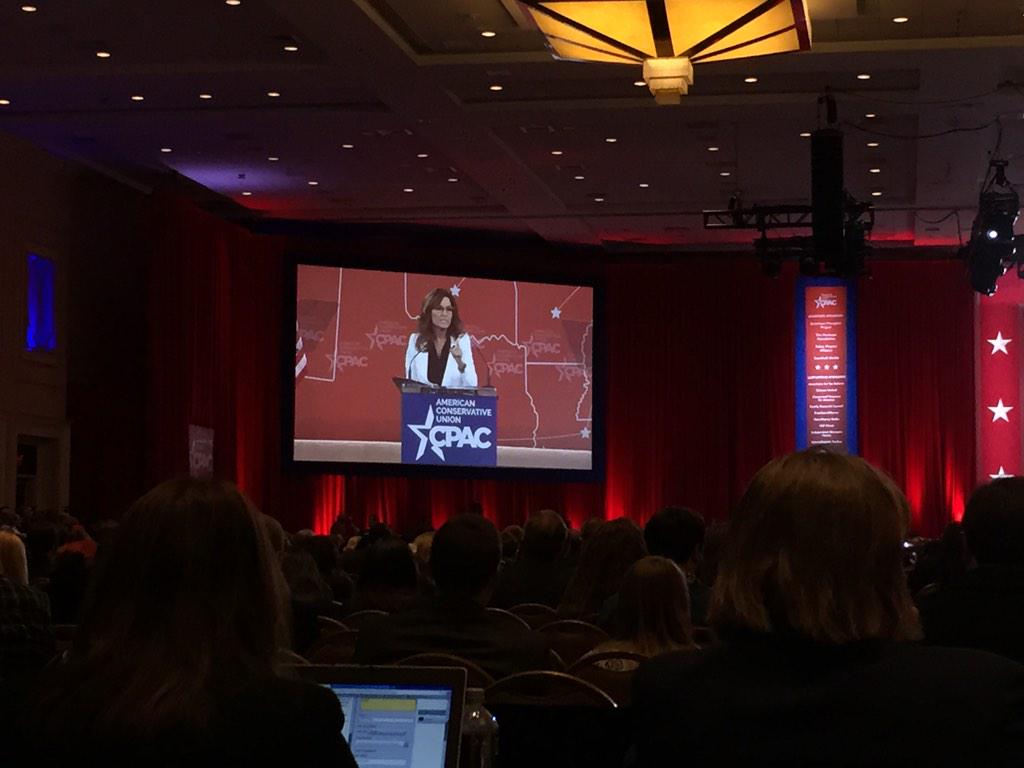 Charlotte Kude ‏@CharlotteKude  10s11 seconds ago
Governor Sarah Palin speaking out for American war veterans. What a start to #CPAC2015!

Gayle Trotter ‏@gayletrotter  45s46 seconds ago
"Aside from God Almighty what is only thing standing between us & those who behead babies & burn people alive?" @SarahPalinUSA #CPAC2015

RSA ‏@RdStateAlliance  2m2 minutes ago
@sarahpalinusa outlining what we can do for our vets. http://ow.ly/i/8NLL7 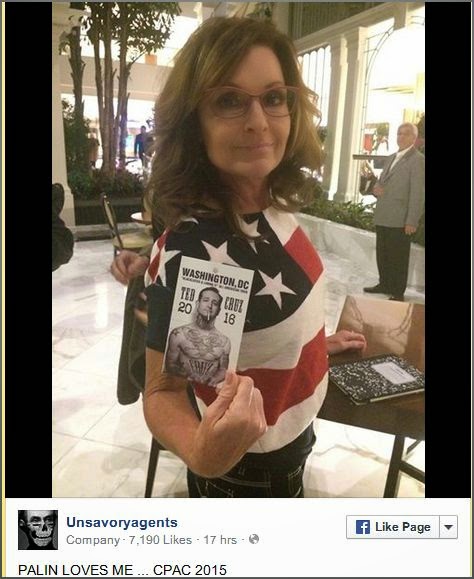 While my friend Anthony Bustamante and I were taking a load of our feet the night in before the annual CPAC convention started, former Governor Sarah Palin decided to make a late night appearance to the hotel lobby bar at the Gaylord Resort and Hotel where the conference was being held.
After talking to a couple dozen of her fan, I approached the Sarah and reintroduced myself to her as Senor Shark from the Shark Tank political blog.
Not really. I introduced myself as Javier from the Shark Tank, which triggered her memory of who I was. It must have been my gloriously good looks that helped her memory who I, El Sharko, really was.
Of course I am at CPAC promoting my new libro, “BROWN PEOPLE,” and I just so happened to have one last copy with me, so I decided to gift it to Palin.
Palin cracked up over the title and the basis of what the book was about, telling me what I already knew, that I was very “witty” before discussing how off target GOP’s messaging to Hispanics.
After chuckling a bit more over the opening title of the book, 50 Shades of Brown,” Palin told me that she “would be honored if I signed ” the book to her.
I did, and then we took a few pictures.
Read more at http://shark-tank.com/2015/02/26/sarah-palin-says-she-loves-brown-people/
Posted by M. Joseph Sheppard at 3:16 PM