All In One Place:Video Images And Comments.Governor Palin At Las Vegas Sportsman Charity Event

LAS VEGAS — Former Alaska governor Sarah Palin met fans at the annual Shooting, Hunting and Outdoor Trade Show in Las Vegas, ahead of a planned side trip to serve wild boar chili to homeless people.
The Sportsman Channel says the 2008 vice presidential candidate and host of the network's "Amazing America with Sarah Palin" would host a Hunt.Fish.Feed event Thursday at the Salvation Army in downtown Las Vegas.

Former Alaska Gov. Sarah Palin speaks to a crowd during an event to promote her television show, "Amazing America with Sarah Palin," at the Shooting, Hunting and Outdoor Trade Show, Thursday, Jan. 22, 2015, in Las Vegas. (AP Photo/John Locher)
Volunteer Las Vegas police officers and Nellis Air Force Base personnel also are scheduled to help serve dinner to up to 1,000 people from U.S. Vets, Catholic Charities and Shade Tree shelters.
Palin also was due to take part in the annual Golden Moose Awards at the Venetian resort.
The SHOT show is at the Sands Expo Center on the Las Vegas Strip 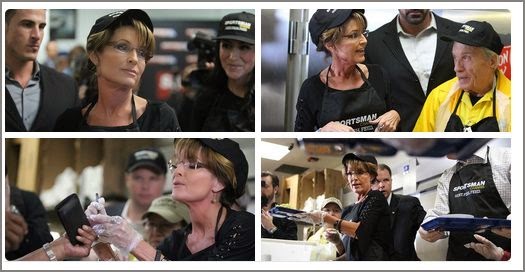 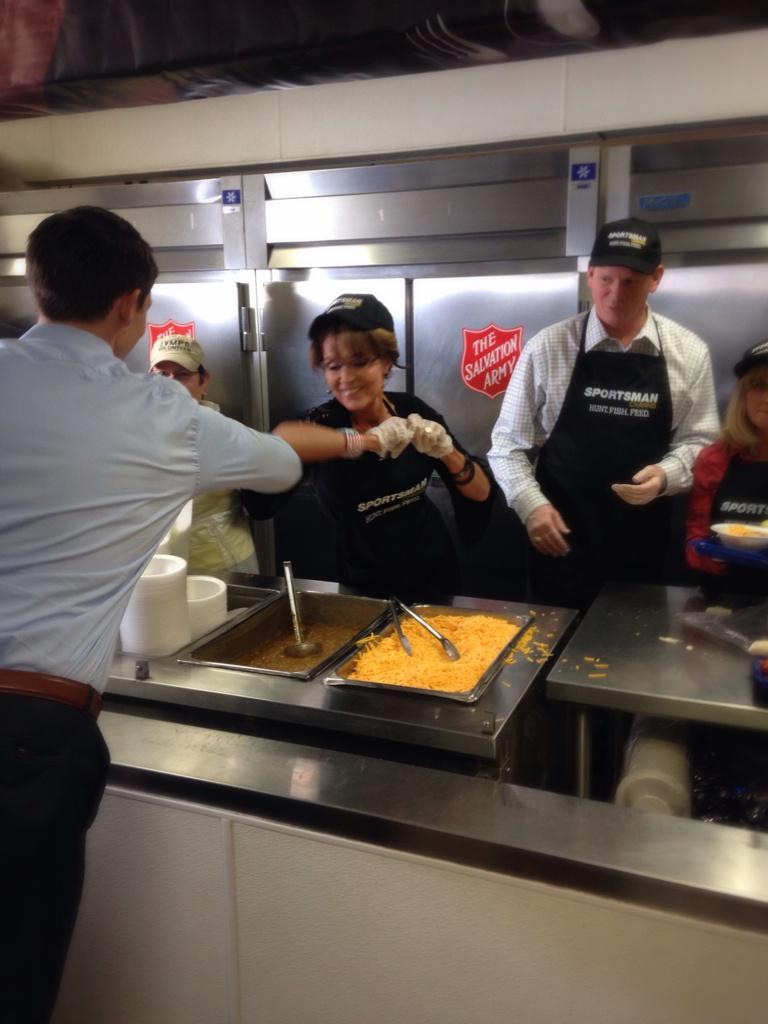 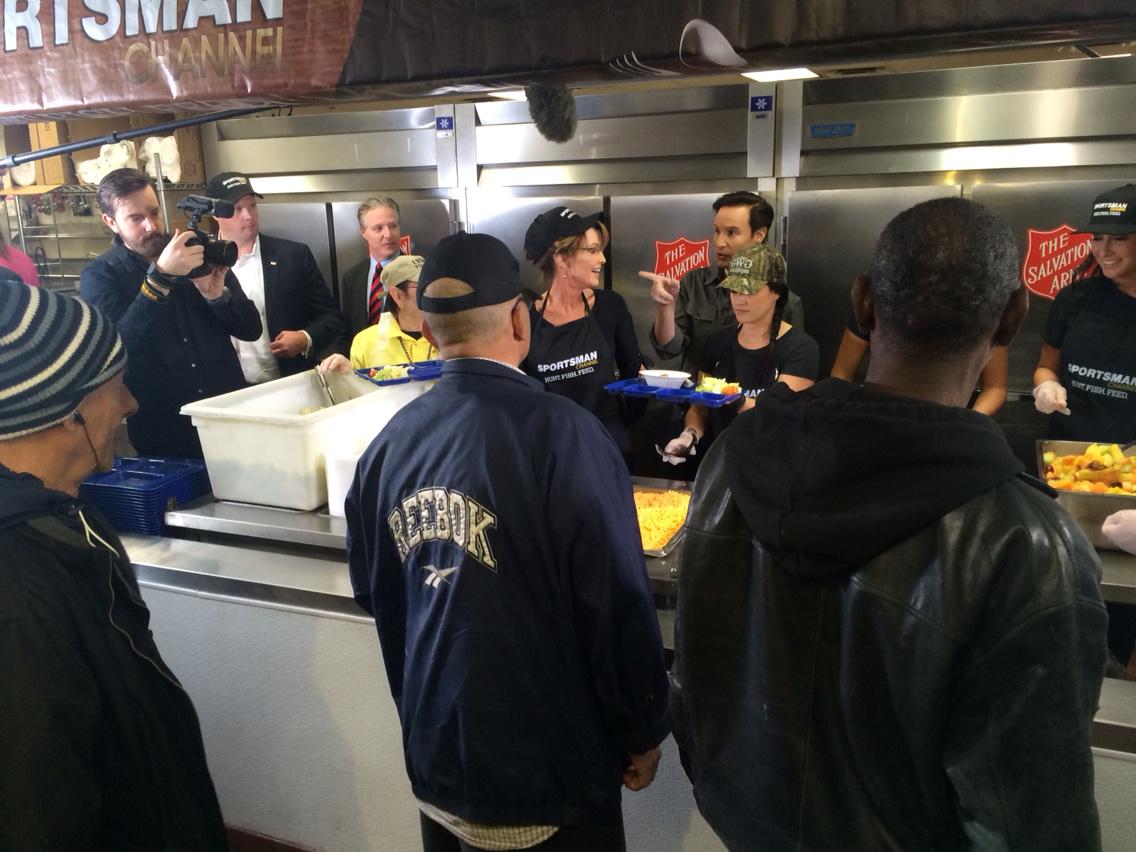 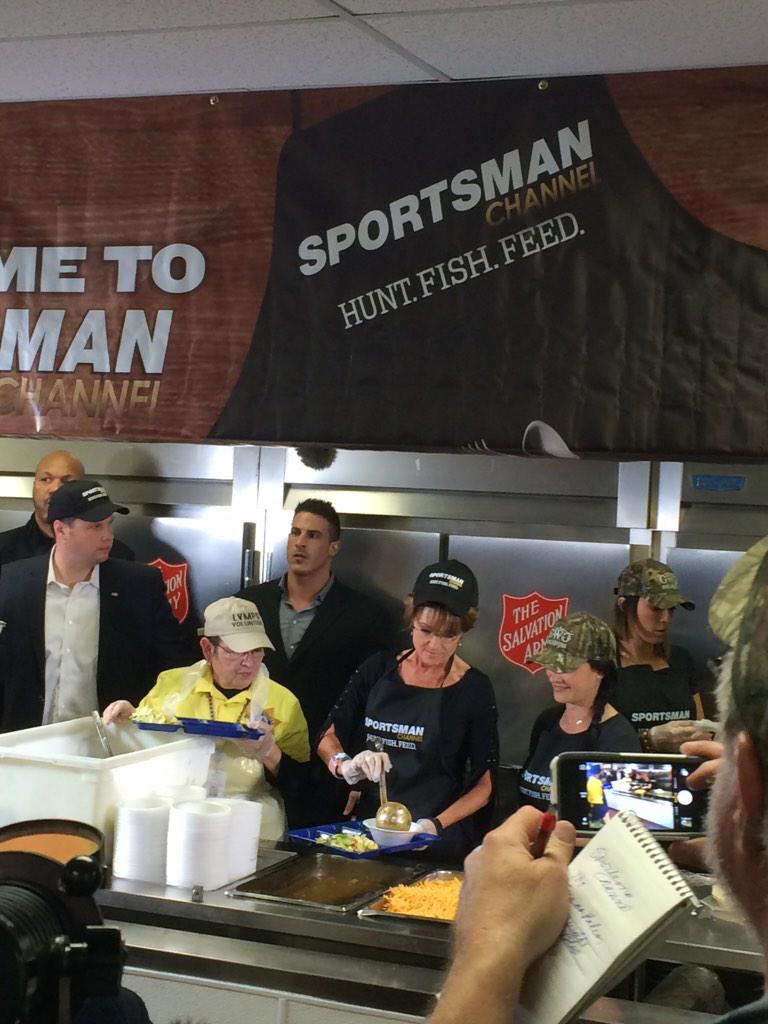 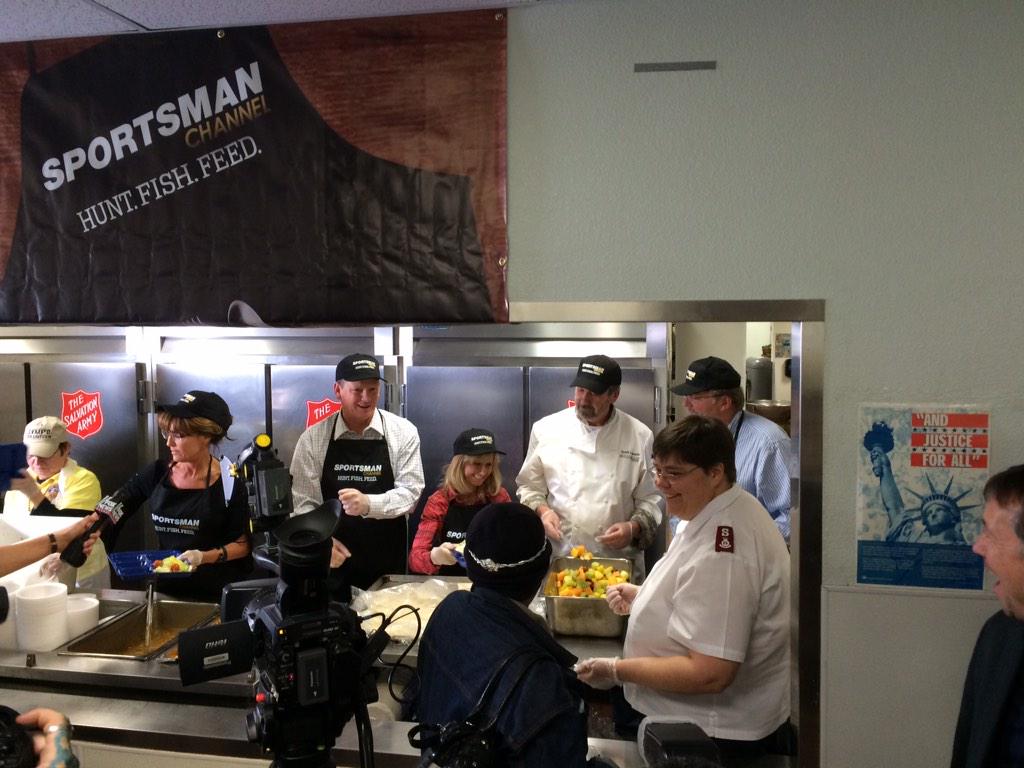 Michelle Scheuermann ‏@ladysportsman  1h1 hour ago
Quite the crowd waiting for @SarahPalinUSA at @SPORTSMANchnl booth! 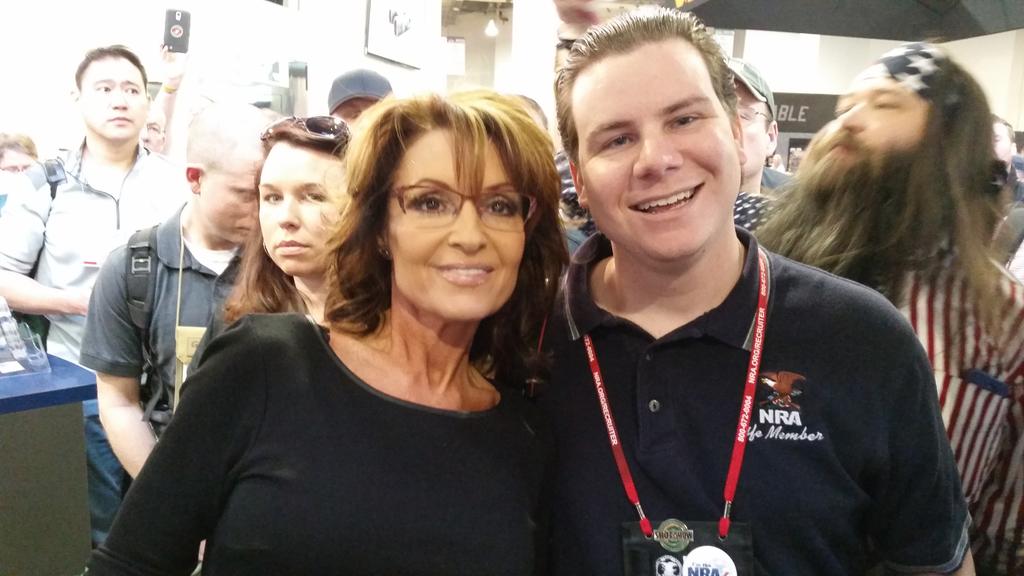 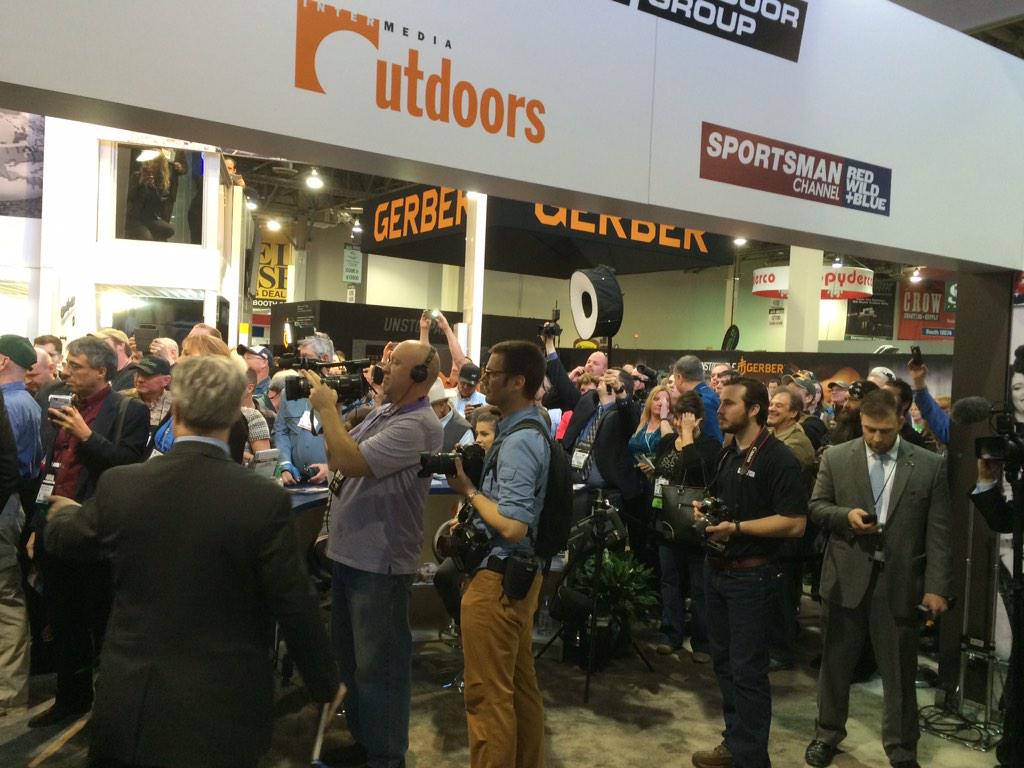 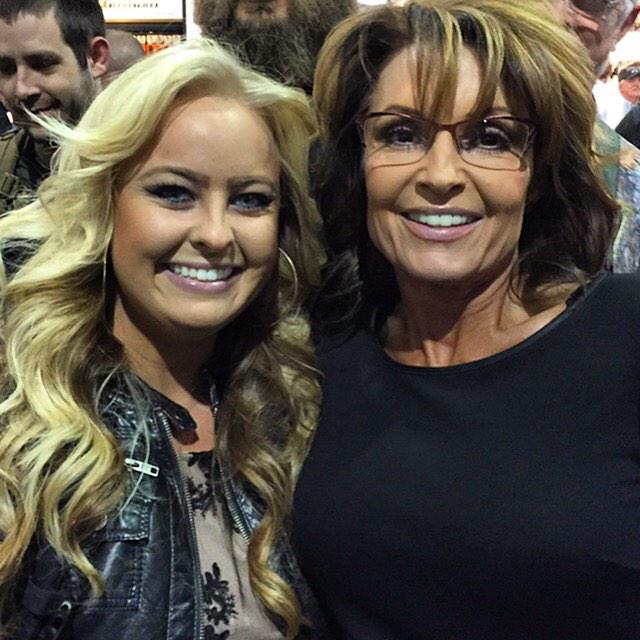 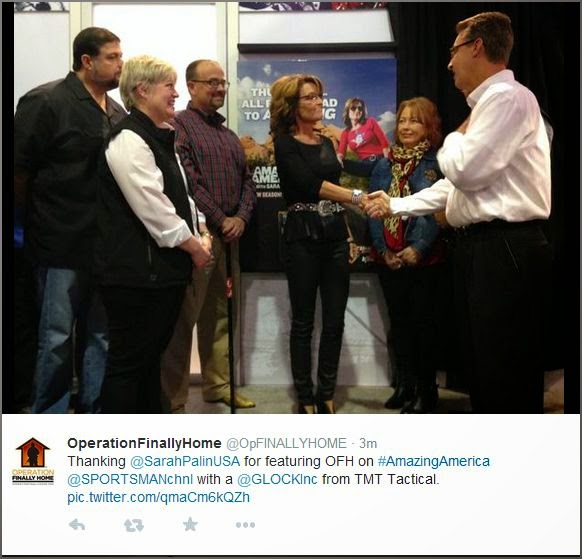 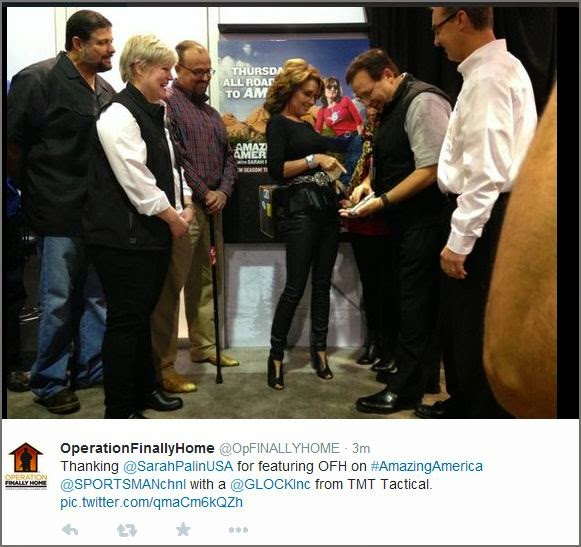 DIVA WOW ‏@DIVAWOW  3m3 minutes ago
Mari and Diana, part of the @divawow crew, visit with @SarahPalinUSA at the #shotshow2015 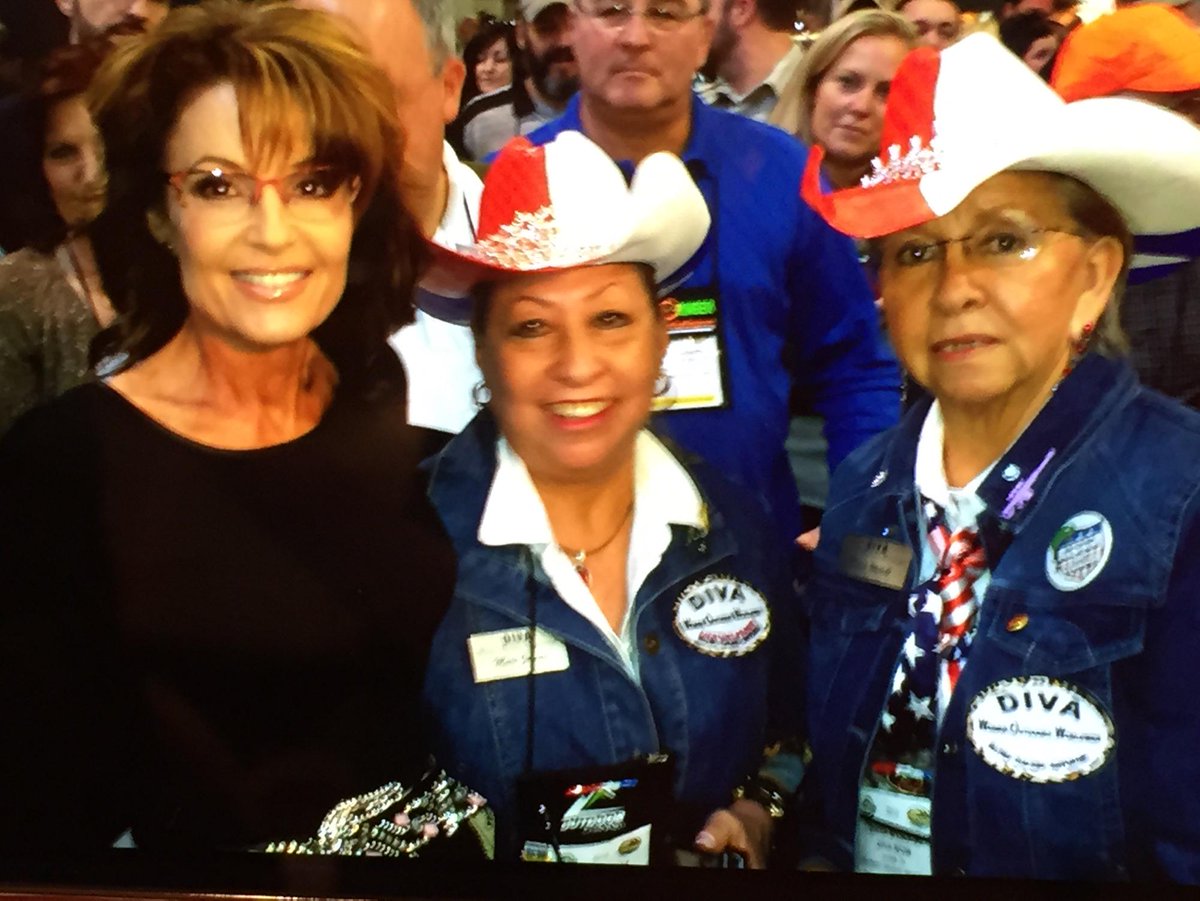 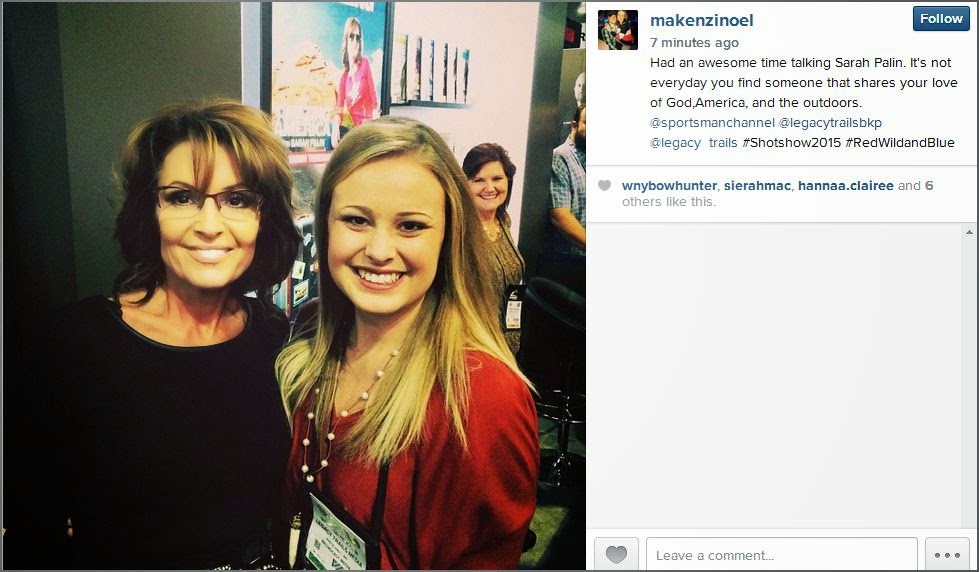 TCR ‏@TCR_Tweet  3m3 minutes ago
Awesome!! RT @kershawknives: Look who I got to meet! 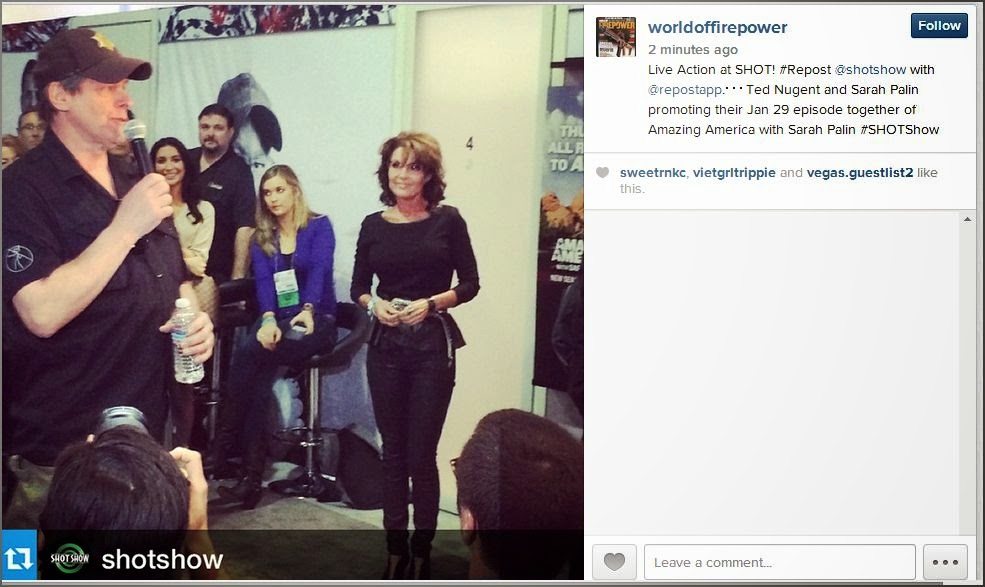 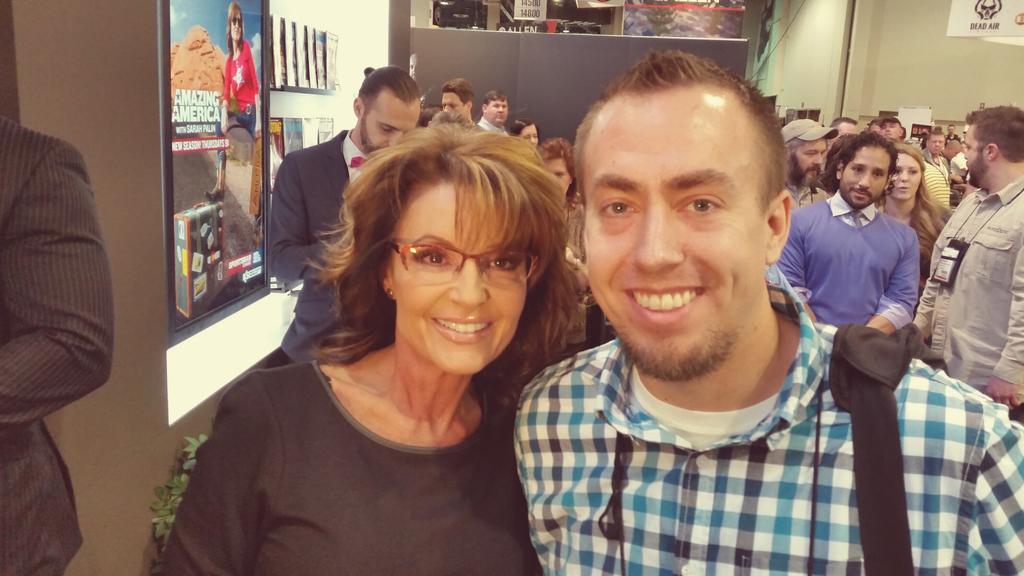 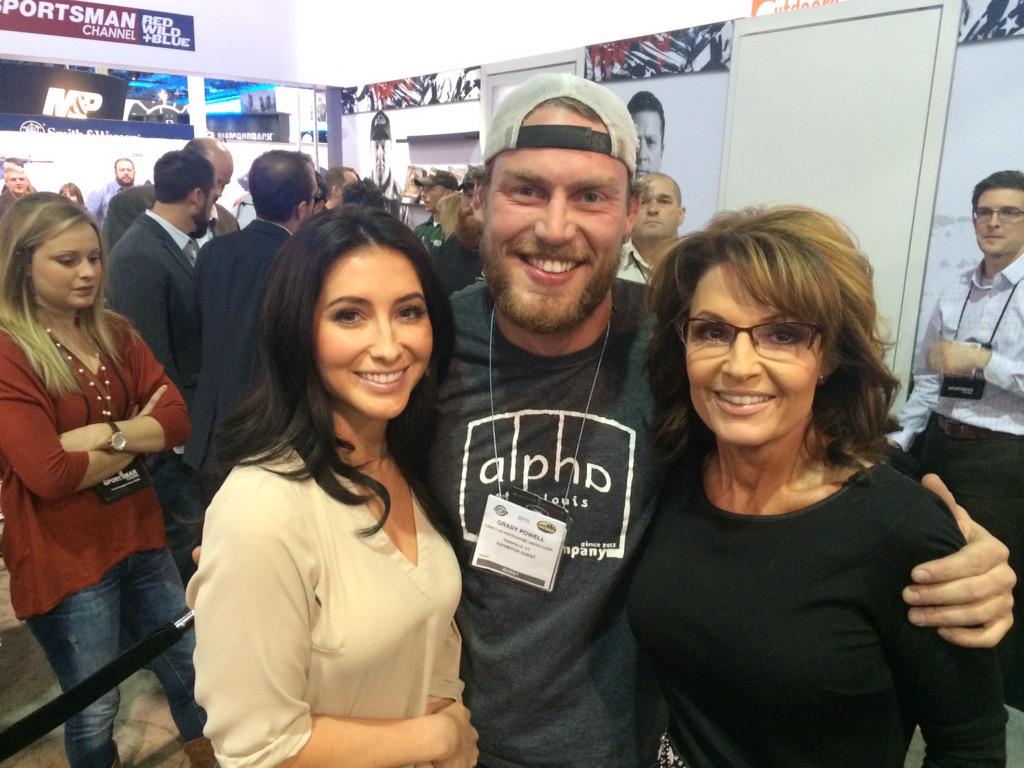 "Ran into some old and cherished friends @BristolsBlog and @SarahPalinUSA while perusing #SHOTShow miss you ladies!" 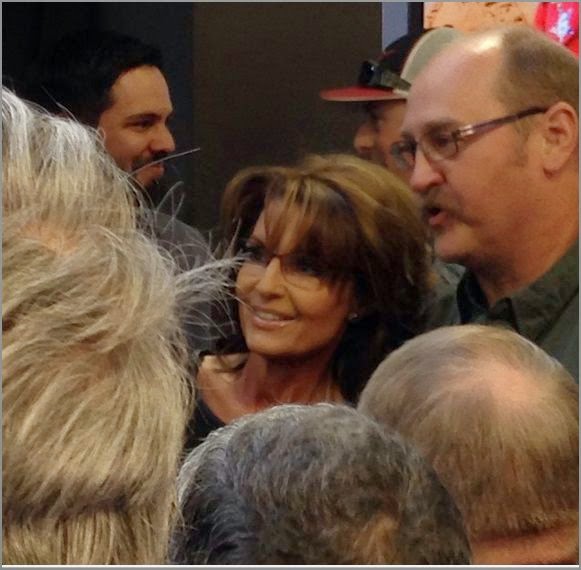 Sarah Palin to feed shelter in Las Vegas on Thursday 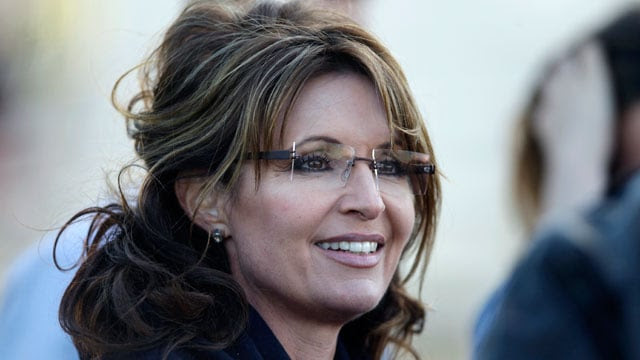 One-time politician Sarah Palin is doing a different kind of campaigning when she visits Las Vegas on Thursday.
In her capacity as a host on Sportsman Channel, the former Alaska governor will take part in the network's campaign to use donated hunted meat to feed the hungry.
The channel's “Hunt. Fish. Feed.” event is expected to serve more than 1,000 people at the Salvation Army on West Owens Avenue. Members of Las Vegas Metro police and Nellis Air Force Base are also expected to help prepare and serve wild boar chili during Palin's appearance.
Organizers noted Palin's role in supporting the program, which has fed “more than 25,000 less fortunate members of society” across the country.
Palin currently serves as host of Sportsman Channel's Amazing America. 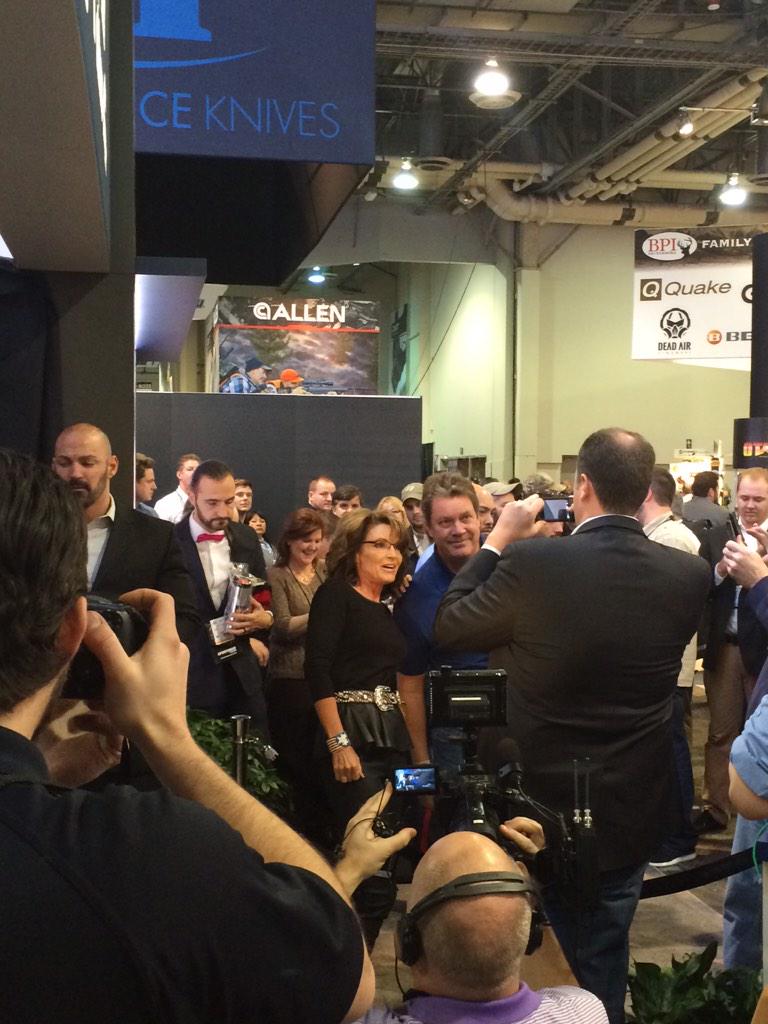 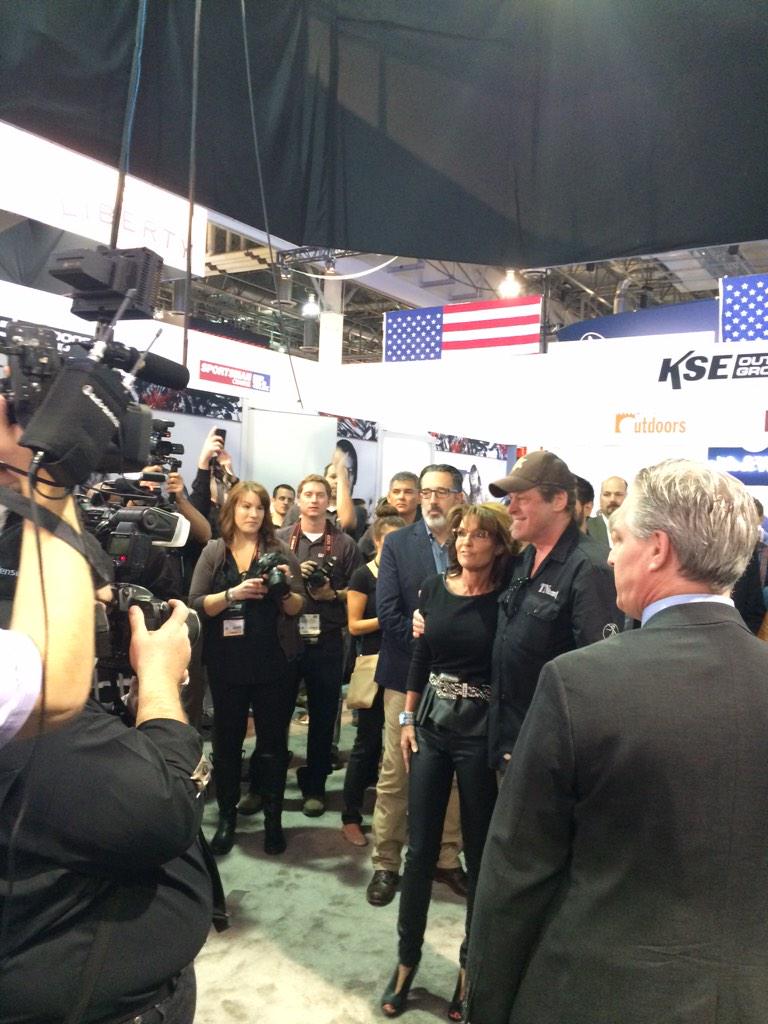 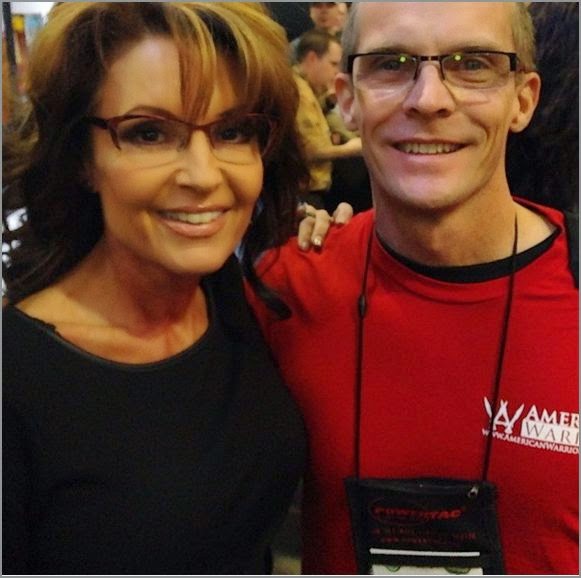 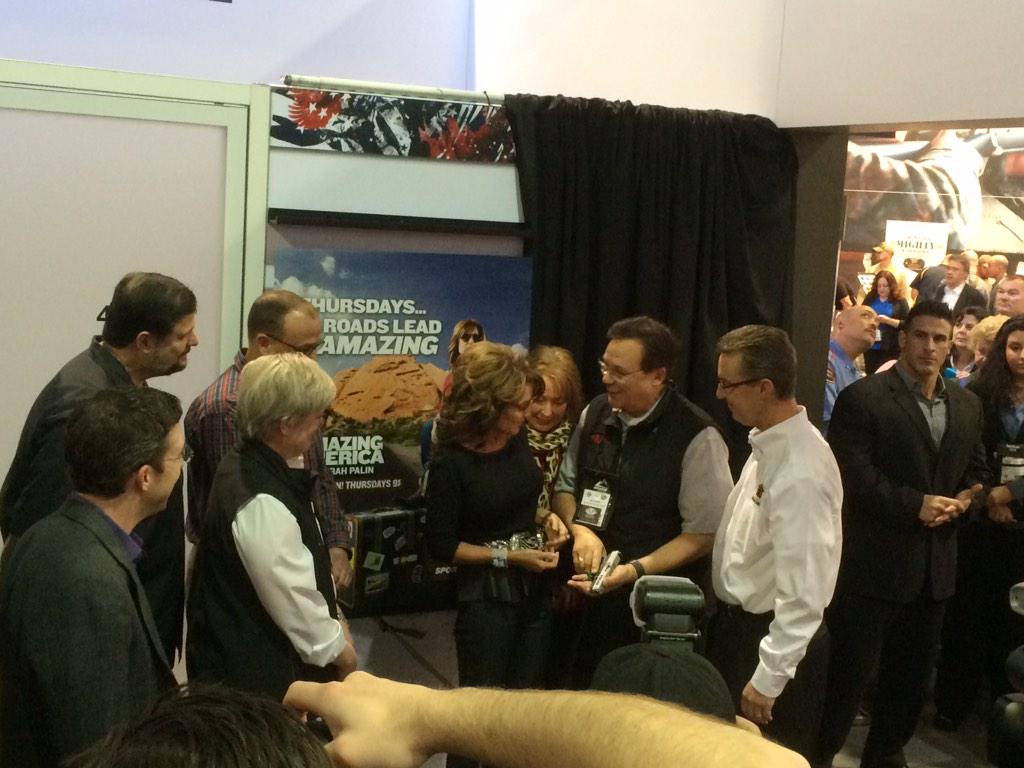 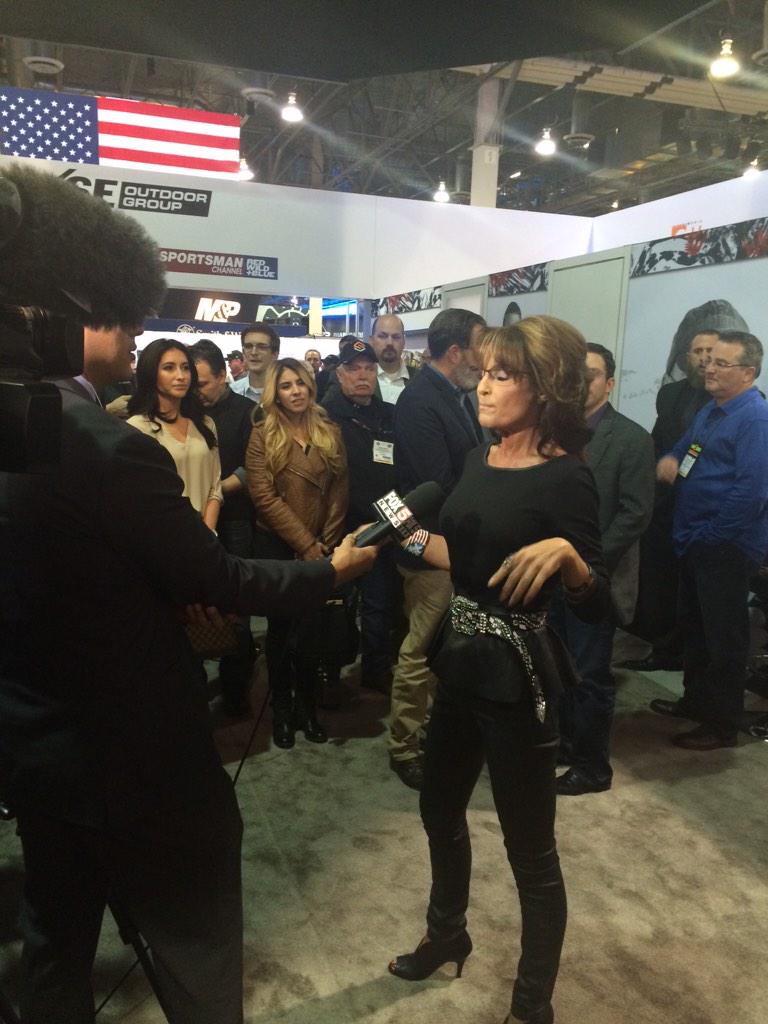 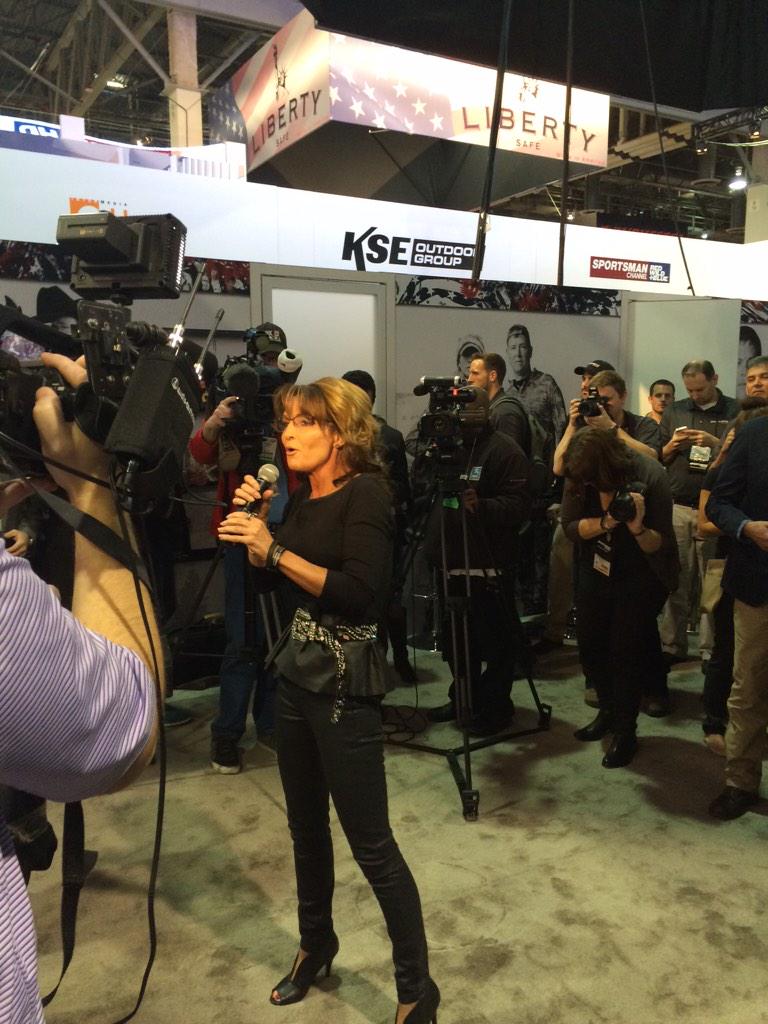 
Sarah Palin on New GOP Majority: ‘It’s Not Just the New England Patriots Who Are Dealing with Deflated Balls’

TheBlaze's coverage of the SHOT Show is sponsored by CDNN Sports and the U.S. Concealed Carry Association.
Former Alaska Gov. Sarah Palin declined to speculate on a potential 2016 run Thursday at the 2015 SHOT Show in Last Vegas, but she did offer the GOP some free political advice. We caught up with Palin as she was promoting the second season of her show, “Amazing America,” which airs on the Sportsman Channel Thursdays at 9 p.m. ET.
“I’m going to talk politics except to say that the GOP better get on offense, they are not going to win any games on defense,” she told TheBlaze. “Being in the majority in D.C., they are blowing it.”
She added, “The GOP establishment, they’ve got to their stuff together. I love what they believe in, I believe in it too. But they’ve got to get tough, man. You know what? It’s not just the New England Patriots who are dealing with deflated balls right now.”

Former Alaska Gov. Sarah Palin (Credit: TheBlaze/Mike Opelka)
The discussion then shifted to “Amazing America,” which she said has received an extremely positive response from American viewers. This week’s episode has been dubbed the “Ted Nugent Special” as she visits the rock star’s massive Texas ranch.
The former Alaska governor said the show is really about connecting with the beauty of the outdoors. And she’s not letting the outrage mobs that get angry over hunting affect her in the slightest.
“Wherever you go in America, there is beauty, there are resources, there are wonderful people out there living life vibrantly — and we can all kind of unify around that, being inspired by what the great outdoors has to offer,” she said. “And our show highlights [that].”
Watch a preview of the episode here:
While in Vegas for the SHOT Show, Palin said she will feed the homeless Thursday night with “organic” and “healthy” wild game.
—
TOWN HALL

Las Vegas - Former vice presidential nominee and Alaska Governor Sarah Palin made an appearance Thursday afternoon at the SHOT Show to launch the second season of "Amazing America," a reality show she stars in on Sportsman Channel.
"I am here and it feels like home," Palin said to a crowd. "I appreciate that you all appreciate the outdoors...thank you all for being great Americans."

Before making an appearance on the SHOT Show floor at the Sans Expo Center, Palin participated in an offsite Hunt, Fish, Feed event with the Salvation Army.
Rock star and avid outdoorsman Ted Nugent, who makes appearances in the upcoming "Amazing America" season also made an appearance with Palin.
"Sarah is my blood brother," Nugent said. "There isn't a better 'we the people warrior.'"
The second season of "Amazing America" premieres Thursday, January 22 at 9 pm eastern.