by bobbelvedere
Special guest post by M. Joseph Sheppard.
Those Republican voters in Kansas, especially the Tea Party supporters, who are considering voting for “Independent” Greg Orman for senator rather than current senator Pat Roberts might give pause when they realize Orman is potentially two senate votes for the Democratic party.
The math is simple and irrefutable. If the election result  turns out to be Dem’s 50 senate seats and the GOP 49 with Orman winning as an “Independent” then, as per his advice, he will “caucus with the party that has the most seats” that being, under these circumstances, the Dem’s who will have a two vote 51/49 majority with Harry Reid triumphant
But, if the result is, as seem highly possible on current polling, Republicans 50 Democrat’s 49 Independent 1 what then?
There is absolutely no guarantee that Orman, a Democrat in previous incarnations, might not find a plum committee post or some other bauble so enticing that he would not find “the national interest via the balance of the GOP having the house and the Democratic party the senate” or some other such wiggle room specious reasoning, to caucus with the Dem’s.
For all his running as a new broom etc he is a politician, and such have been known to do anything when it suits (see Specter, Arlen for example).
Orman himself confirms this obvious concept:
Orman: I Could ‘Absolutely’ Switch Parties After Picking Senate Side
Then the result would be Democrat’s and allies 50 Republicans 50. At which point Vice-President Biden becomes the casting vote and gives Reid and co. control of the senate.That such a result would make a mockery of  Kansas true political leanings, not having had a Democratic party senator for 80 years, is beyond doubt-which mockery counts for nothing with the Beltway machination machine.
Thus Orman goes from being the Republicans 51st potential vote to, in actuality via the Biden co-joined vote seeing the Dem’s go from 49 to 51 votes. The reality is that an Orman win can be worth two votes and a working majority for the Dem’s. Latest polling has Orman up by 5 points-the danger, not just for Roberts, but for the entire GOP is clear.
This possibility should be driven home to the wavering Kansas Tea Party (to whom Governor Palin surely made it clear where their support should go with her visit to Kansas to visibly and vocally stand by Roberts) and to the regular Kansas Republicans. A vote for Roberts shores up the possibility of getting rid of Reid, and of ensuring President Obama is the lamest of lame ducks.
A vote for Orman, or  staying home on election day can very much mean an Obama and Reid triumph and give bad portends for 2016. It also gives the Dem’s a mechanism, via “independents” to pull of this game in other red states-what difference does it make to them if, as in Alaska and now Kansas, they don’t run a regular Democrat if they can sneak one in to caucus with them under the Indie label? Electoral-Vote.com the noted polling analysis site has a commentary up which clearly states the danger for republicans:
Vox has a story on Kansas Senate candidate Greg Orman and what he might do if he wins. The article says he is cynical because he says he might caucus with either party but his platform fits much better with the Democrats.
Mr. Sheppard is the proprietor of the blogs Point Of View and Palin4President 2016.  He also writes occasionally for American Thinker and is a man of refined taste.  Follow him on Twitter: @MJosephSheppard.
Posted by M. Joseph Sheppard at 5:55 PM

Message To Sarah Palin:
If you pledge to ‘pay whatever price it is going to take to protect our Constitution’ then it is your duty to run for the Presidency in 2016 because you are the best possible candidate.
You ‘get it’ the most out of all nationally prominent conservatives.
You have executive experience.
You are possessed of Common Sense.
You can articulate conservative beliefs better than anyone else in possible contention.
You are possessed of the same strength of character as Ronald Reagan, Margaret Thatcher, and Winston Churchill.
Don’t do as you did in 2011/2012 and refuse to pledge your life, your fortune, and your Sacred Honor in our cause.  While your reasons were understandable, the time has come for all True Americans to be willing to sacrifice all in the cause of restoring our Freedoms and Liberties.
If people like yourself do not do the right thing now, there will be much blood shed later.
Do your Duty, dammit.
Your Humble and Obedient Servant…
Robert Belvedere
Posted by M. Joseph Sheppard at 9:40 PM 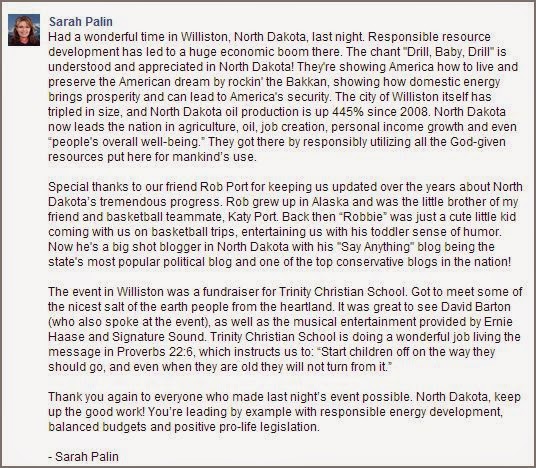 Visit NBCNews.com for breaking news, world news, and news about the economy
Posted by M. Joseph Sheppard at 6:06 PM