Palin was asked to be the keynote speakerfor New Hope High School's commencement ceremony. Tickets to her speech were available to the general public, but these tickets were soon no longer available. In a statement, the school system said New Hope High School would provide adequate tickets to graduates and their family and friends, as well as to the community.
Despite there being no tickets available through official channels, it has not stopped some folks from trying to cash in.
Each senior student was limited to 20 free tickets for family and friends, but three listings for tickets landed on Craigslist in the days leading up to the ceremony: one for $200, another for just over $100 or best offer.
Palin's appearance was paid for by an anonymous donor from the community. No one has released just how much Palin received for showing up. School officials stressed her appearance did not cost the school system.
The students may not have been up on the politics surrounding Palin's visit - they were fairly young when she was running for Vice President, but quite a few said they were thrilled to have someone of national stature coming to the graduation ceremony for a small-town high school like New Hope.
"I'm pretty pumped about it," said soon-to-be graduate Wesley Bridges before the ceremony. "It's a once-in-a-lifetime opportunity and I got from row seats to her."
Sarah Palin's message to the Class of 2014 was about facing fears, accepting the possibility of failure, and learning from what you experience.
"One piece of advice," Palin told the seniors at the beginning of her address. "There is no need to remember the speaker tonight... go forth and conquer, but do not be afraid to fail. This country needs you to not be afraid."
Palin said that things that may seem like failures are things that people can learn from.
"Avoiding failure, shying away from competition so you don't feel a temporary hurt... that is not success," she continued. "You have a choice in how to act regarding the less than ideal circumstances. You become bitter, or you become better... God's got your back."
"Congratulations, Class of 2014. You give me New Hope... to this country, the greatest country on Earth," she concluded.
After her speech, Palin stood among school leaders to shake the hands of each graduate as they accepted their diplomas.
"She came from a really small town and it's inspiring to hear that someone from a small town can go and do so many things," said student body president Leah Tabor. "I hope it's something that lights a fire under all of us and gets u
Posted by M. Joseph Sheppard at 9:43 PM

She is an awesome speaker ! #sarahpalin


Vera Rutherford ‏@vruthe  1m
@SarahPalinUSA awesome speech tonight. Excited that my daughter and I got to be there!

Taylor Reed ‏@rollbluetide  6m
Governor Sarah Palin just gave one of the best speeches I've ever heard! She's got it figured out and we need more like her in Washington!

Wishing @bjtreece was here with me to hear Sarah Palin speak .. He would have loved it!!

For once in a long time I feel like I live in America! @SarahPalinUSA

literally half of these people peaced out after Sarah Palin gave her speech.

What did I just see? Kids praying. Kids talking about God in public, in a public school. Kids physically touching teachers.. hugging. Sarah Palin encouraging kids to defend what they believe. Kids loudly applauding Sarah Palin when she pokes fun at "Hopey-Changey".

Who is Cathy Maples?

Cathy Maples is a Huntsville businesswoman, has struck up a friendship with Palin over the years. And when a special occasion arrived, Maples turned to Palin. Camden Brewer, Maples’ grandson, is among the 77 New Hope graduates who will here Sarah Palin speak tonight.  Maples confirmed in an email today to AL.com that she asked Palin to speak at the graduation.
“I have met Sarah numerous times and have had dinner with her,” Maples said in the email. “She is the real deal and she is not afraid to speak out about things that are not ‘politically correct.’”
Maples, who is president of R&D Electronics in Brownsboro, bid $63,000 in 2009 to win a dinner with Palin.Read more 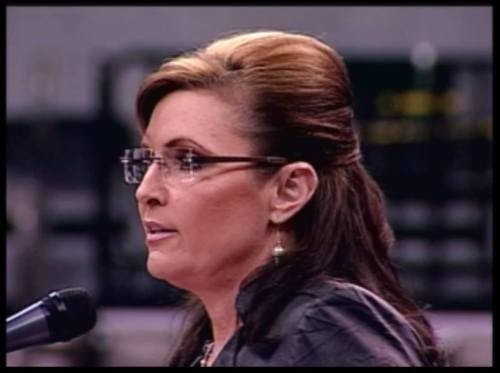 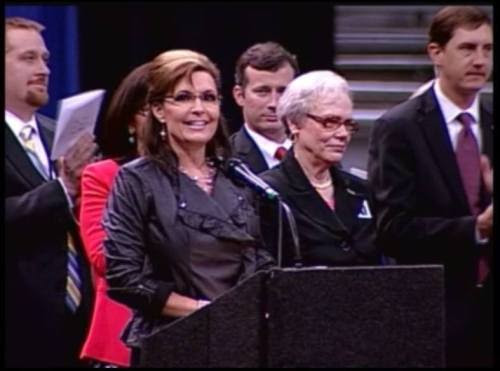 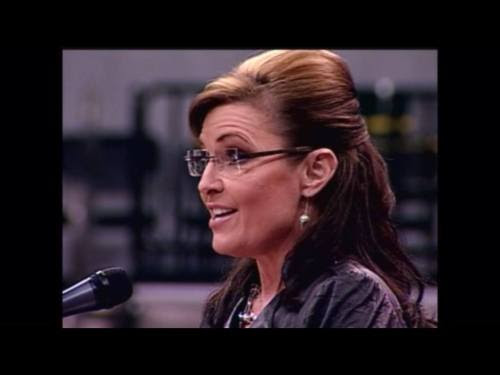 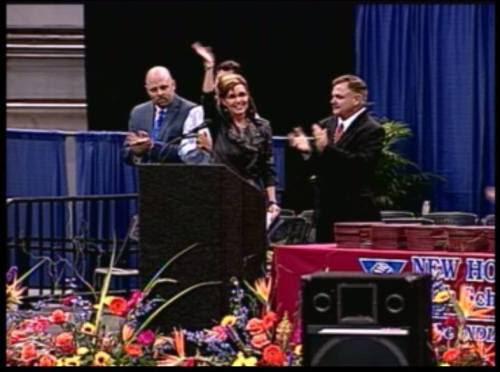 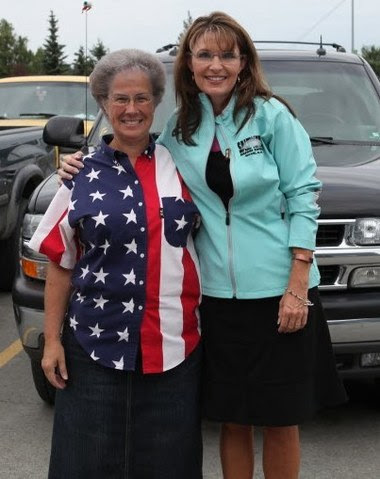