The left, and, sadly some on the supposed right keep pushing the story that "Palin cost McCain the election in 2008." The weight of academic study from university political science departments and from polling companies and respected political sites all utterly refute this allegation-or rather blatant lie as the case may be.

Rather than detailing the salient points from all of these studies I link them below.Anyone with the slightest leaning to a non-biased point of view-no matter how leftist they were would have to admit this independent, academic analysis makes it very clear what the truth is.

This graph makes it clear as day what the "Palin effect"
was for McCain's campaign and exactly when his chances ended after being ahead. Just after Lehman Brothers collapse you can clearly see Obama go from being behind to zooming straight up in Electoral College votes. 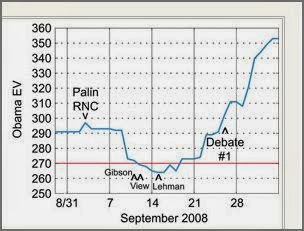 The 2008 Election in Perspective

PEW RESEARCH CENTER FOR THE PEOPLE &amp; THE PRESS November 5, 2008

UPDATE;Dramatic 2008 Electoral College Maps Show The "Palin Effect" At Its Most Powerful And Portend For 2016