UPDATE;Dramatic 2008 Electoral College Maps Show The "Palin Effect" At Its Most Powerful And Portend For 2016

UPDATE:  Sarah Palin's gave revelations on Greta Van Susteren's program LINK that she was muzzled about then candidate Obama's connections to Ayers/Wright during the 2008 campaign. In the light of those comments I think it fair to amend my original question below "Would McCain/Palin have won without the economic collapse? " Now it should be "absolutely, if the McCain team had allowed Palin the freedom to say what she wanted too and to campaign in Michigan as she requested"


The outstanding election site Electoral-Vote.Com commenced a running commentary and analysis during election year 2008 which is available archived AT THIS LINK. It is instructive, looking ahead to a possible Palin run in 2016 to review the McCain/Palin teams performance. It is impossible to recapture the excitement of a presidential campaign five years later but some of the emotion can be discerned in "The Votemaster's" writing.

He is one of the most dispassionate, balanced commentator around, and, although writing from the left I respect his intellectual approach to his subject which is lacking in the usual partisan hyperbole so often found on political blogs.

But even given this generally dispassionate approach the puzzlement, and then fear on the left about Palin and her effect on the seemingly inexorable Obama steamroller up till then, comes through in  my opinion. But that adds to the dry images and figures, and brings the campaign back to life including the frenzied, unprecedented, attacks on Palin and her family by the leftist media.

This first map shows the Electoral College numbers September 5th. and shows the state of the race after the Democratic convention with Obama having received a major "bump"and in a massive lead after his acceptance speech August 28th . Obama was ahead with enough votes to be elected (270 the minimum) based on state by state aggregate polling (the same method that Nate Silver at 538.Com used to such effect.) 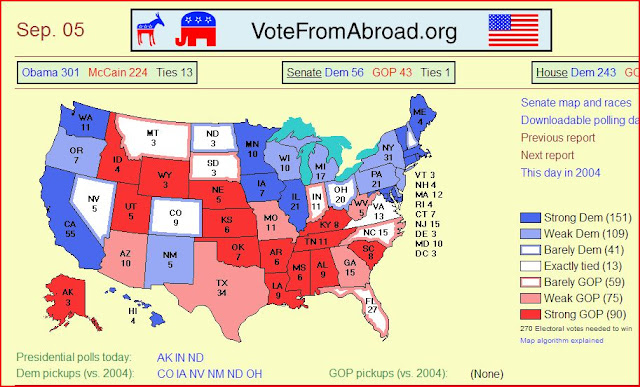 On August 29th, John McCain surprised and amazed the political world by announcing Sarah Palin as his VP running mate

"The Votemasters" comments post the GOP convention reflects the almost universal analysis of Palin's address;
"There is no doubt Palin is an enormous hit with the Republican base. She electrified the crowd, no two ways about it. They just loved her. Any doubts they may have had about her are gone."

Palin had given her speech and the next polling was to show an amazing turnaround. McCain/Palin gained 43 Electoral College votes and Obama lost 30 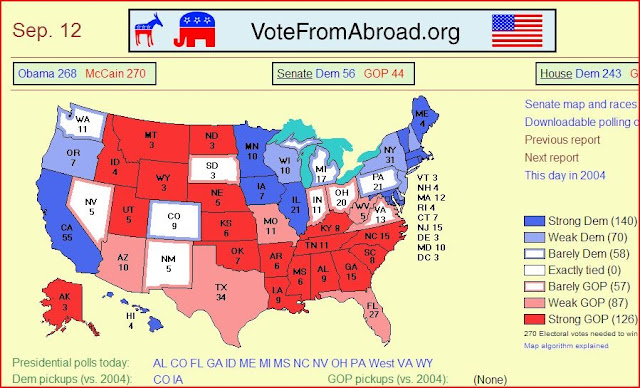 Here is the McCain/Palin team at their highest point-Obama having lost 55 Electoral college votes since September 4th whilst McCain/Palin gained 47. There is no doubt the race would have fluctuated up and down till election day, but barring unforeseen circumstances victory was more than possible. With Pennsylvania given to Obama the McCain/Palin team would have been elected 274 to 264 if this map had held in November. 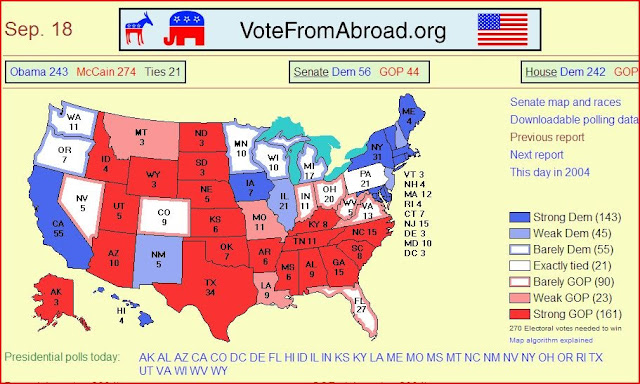 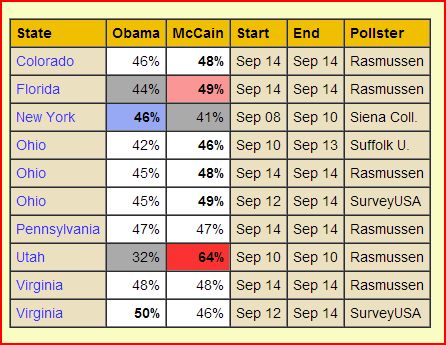 On September 16 the end of the race came effectively. McCain's "Campaign suspension" with no solution to the economic collapse, and his back-down on missing the next debate, finished any hope the GOP had because of Palin's monumental efforts. As the next chart shows, once the aggregate polling had caught up with the time delay, Obama moved in front and stayed there right till election day.

Lehman Brothers and Merrill Lynch no longer exist, A.I.G. is being radically restructured, and the Dow dropped 500 points yesterday. Guess what? The economy is back." 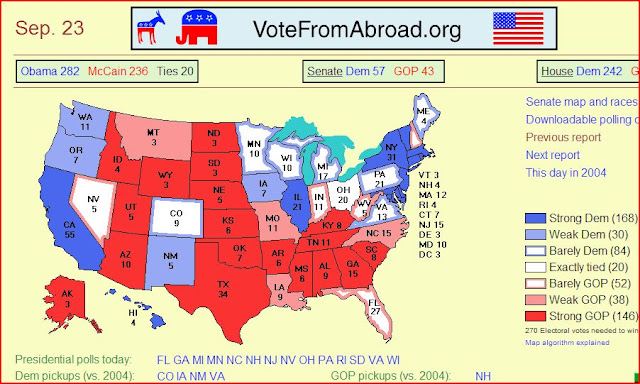 Would McCain/Palin have won without the economic collapse? With so much inherited from the Bush administration against them it would have been a mighty challenge. However, with the public unsure about the inexperienced Obama and the conservative base hugely energized by Palin on the ticket, there was a chance of victory as the September 18th map showed.

The GOP Establishment and  Democrat's fearful of a Palin run in 2012 tried to pin the blame for the loss on her. Post election analysis shows LINK that this was clearly not the case, and that Palin, as was obvious, added immeasurably to McCain's recovery and chance of victory. Nothing she could do after the crash could salvage the McCain campaign. For Palin to have brought McCain to a tie in Pennsylvania is a little recognized but phenomenal achievement.

With the same support from the Republican base, and with her being freed from McCain's advisers and their ilk, this 2016 electoral map projection shows LINK she has the chance that was there in 2008 before the crash.

With thanks to The Votemaster for permission to reproduce his maps and comments.
Posted by M. Joseph Sheppard at 12:52 PM