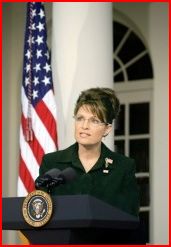 To counter the silly claims of the left and some in the Beltway GOP that Sarah Palin is devoid of policy ideas I posted a whole series of her statements across a wide area. These included energy/foreign policy/social issues and of course economic issues.Plus there were links which countered some of the ridiculous propaganda stories about her.

They are available AT THIS LINK.

I thought it would be useful as an adjunct to that post (reproduced in whole below) to also include her core concepts for this election, the form part of a message to supporters which covers a wide range of matters (including a list of some key candidates to support)with the following as the policy statement:


With only six weeks left before Election Day, I have just one question for you:
Will you help me finish what we started in 2012?
In 2012, millions of ordinary Americans like you and me came together and formed the Tea Party movement.
We told Barack Obama that we didn’t want America “fundamentally changed.”
Why? Because we love America. And we’re willing to fight for it.
But now in 2012 we’ve got some unfinished business on our hands, and it’s clear what we need to do:
#1. Defeat Barack Obama and #2. Win the U.S. Senate.
Barack Obama’s “fundamental transformation” of America is destroying everything that made our country great.
If he and his class-warfare cronies in the Senate aren’t defeated, there will be no end to their regulating, spending, printing and borrowing.
If we want to save our country, then we must change the team and the game plan in this crucial 2012 election.
In fact, if we don’t win this election, I predict that our nation will never recover.
We will go the way of other broken, failed governments.
Nations like Greece – where young, able-bodied citizens expect a government welfare check for doing absolutely nothing.
I don’t want my children and grandchildren working the rest of their lives just to pay off Obama’s debts.
And I’m willing to be you don’t either. So I’m asking you to join me in finishing the job today.
Help me prove that the Tea Party movement isn’t simply a political fad……it’s an American awakening.
And it’s coming from ordinary Americans who understand that reclaiming our America means:
** Repealing ObamaCare.** Upholding the Tenth Amendment.**Reining in overregulation.**Canceling Obama’s unused stimulus money.**Eliminating all federal corporate income tax, corporate welfare, and loopholes.**And tapping into our abundant American energy resources – oil, natural gas and clean coal – to free us from dependency on foreign dictators!
This is the kind of sudden and relentless reform in Washington we must have if we are going to defend the future of our families and our nation.
Now is our chance to grab the bull by the horns.
The media elites are predicting that the Tea Party isn’t going to be a difference maker in this Election.
Many of them are also saying that I’m not going to have much of an impact.
As usual, they don’t know what they’re talking about.
My Tea Party friends are telling me that they’re even more excited about this Election than they were in 2010……because this November we have a chance to fire Barack Obama!
State by state, district by district –by bus, by plane, on the stump – you can count on me to do everything in my power to elect the candidates that share our vision for America.
Will you join my SarahPAC Revolution and help me elect pro-family, pro-America patriots who share our beliefs to Congress?
Thank you for helping me save the America we know and love!
Sarah Palin
P.S. As we seek to fundamentally restore our great nation to strength and prosperity, we must send more commonsense conservatives to the U.S. Senate. Please see the enclosed “Retake America Reply” to see who I’m supporting and howyou can help. Many thanks for your continued support!
“Retake America Reply”
If we’re going to take back our country, we must first take back the United States Senate. To help make this happen, I’ve identified four rising star conservatives who need our support:
Ted Cruz, TXDeb Fischer, NEJeff Flake, AZRichard Mourdock, IN
Posted by M. Joseph Sheppard at 8:27 PM