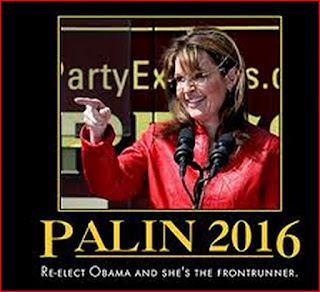 This site has no adverts/generates no income and is not an avenue for me or my ideas-it exists strictly to promote Sarah Palin as the GOP's presidential candidate and president in 2016. For those who have the same point of view it is an open forum at all times and all supportive comments are welcome.

The site will flourish, or not, depending solely on the enthusiasm and input of people who wish to see Palin as president. If another site appears that has a better presentation or wider appeal than that's fine and to be welcomed. in the meantime this appears to be the sole site for enthusiasts for Palin 2016 who are most welcome.
MJS
NB;


Well I have achieved something few Palin supporters  have-lead article about my Palin 2016 site on hate site "Immoral Minority" This is of course a badge of honor which I treasure deeply.

They also quote the comments at Conservatives4palin about
their comments-sort of a logic goes out from here, madness comes in tidal effect. Their site serves an important purpose, sort of like bestiality pornography, in that it is an outlet for the disturbed who might otherwise commit acts of real, instead of verbal violence.

Why Mitt Romney will win in 2012 and why Sarah Palin may challenge him in 2016.  Voters may deliver Romney a decisive victory, not because they love Romney, but simply because they fear another four years of Obama.  Hope & Change became Smear & Fear in four short years.  Voters are tired of the Obama administration's lawlessness, arrogance, lies and want this long four year national nightmare of Obama to be OVER. But what are we getting with Romney?  Many believe that while Romney may slow the bleed of Obama, the Romney administration may fall short of saving America.  2016--enter challenger Sarah Palin.

Gov. Palin about 2016: "Anything is a possibility"

Gov. Palin about 2016: Anything is a possibility

I think it should be quite impacting.  It gives us an opportunity to contrast what private sector enterprise and the entrepreneurial spirit that built America is versus Obama’s failed policies that really are centered on growing the federal government and taking economic freedom away from our small business men and women, especially as we try to re-invest the products of our labor and hire more people.  We’ll be able to point out some of those contrasts between policies.

Well,  it’s not just the hard core conservatives, fiscal conservatives, in the Republican Party, but many, many Independents, and just the patriotic Democrats who are understanding that President Obama’s policies are failing this country.  When you have 23 million Americans underemployed and unemployed and millions more on food stamps, and those having to rely on government or feeling invited to rely on government instead of their own work ethic in order to survive, so many Americans are understanding that we do need a choice come November.  Do we need to continue down this downward trajectory in our economy based on President Obama’s failed policies that are kind of modeled after failed socialist nations, or can we go another direction?  And can we allow the private sector to grow and thrive?  That’s what I’m hearing from Americans is that great concern.

When asked for her reaction to President Obama’s remarks yesterday that the private sector was just fine, Governor Palin said:

Oh, absolutely out of whack comment, but very indicative of his thinking about what it’s going to take even to get our economy back on the right track.  If he truly believes, until somebody dinged him and said, “Get back on there in front of the cameras and explain yourself a bit better”  and gave him some talking points.  But for him to truly believe that the private sector’s doing OK in this time of economic woes is quite indicative of he being quite out of touch with what the normal working man and woman is feeling today in America.

Asked for her response to Obama’s  claim that 4.3 million jobs have been created under his watch and that budget cuts in local municipalities are responsible for the slower pace in job creation, Governor Palin said:

Well, it’s quite unfortunate that President Obama had no experience coming into this office of the Presidency, no private sector experience and no local or state  government, really, experience, except for his time as a law maker, but not as an administrator in a state, he not understanding that no,  there is a proper role for local and state and the federal government in our lives, but that’s to allow infrastructure to be built in order to provide a tool for the private sector to be able to grow and to thrive, and instead, he believes that local and state governments need to grow and take more of what the private sector earns and produces and re-invest it according to politicians’ priorities, and growing government is the answer.  Again, a comment like that is quite indicative of his idea that government is the answer, and instead, most Americans, I believe, understand that, as is often the case, government is the problem, it’s not the solution.

Later in the segment,  Ms. Pemmarajuquestions introduced a few questions chosen from those that viewers had sent in via Facebook and Twitter.  The first questiin, from Jan Nicholson on Facebook, was whether Gov. Palin  still considered a third party a possibility  if  ”the GOP continued to resist the new crop of commonsense conservatives.”

Oh well, Jan hit the nail on the head there in suggesting that it’s a possibility that the GOP would kind of  disenfranchise or invalidate this new crop of fiscal conservatives and Independents who just want to get the economy back on the right track.  Heaven forbid we see that in the next few months.  Oh, yeah, there is that possibility of a third party rising, but that’s only if  the GOP power players would choose to kind of co-opt this new crop of fiscal conservatives.  Let’s hope that doesn’t happen.

Uma brought up the mixed reaction about the performance of those who came into office on the Tea Party wave in 2010.  She asked Governor Palin what she had to say about that, to which she responded:

Well, and then on the flip side, we have those who have stood so strong, like Allen West and others who have said, “No, I won’t be co-opted by some of those power players in that GOP machine, who still want quite this controlling hand over the GOP mechanisms, and we have good freshmen crop in there, who, you know they’re trying to do the right thing in getting government on the side of the people and get it off our backs, and we need to continue to encourage that new crop of law makers who understand what governments proper role is.

The next question from Facebook was what position in a Romney administratration she thought would suit her best and would she accept it.   Governor Palin replied:

Oh, hypotheticals like that, I think requires one to be quite pretentious and believe that that would ever happen.  I really don’t see that happening.  Thank goodness, there are millions of Americans, quite qualified, quite pro-private sector, who would fit well in a Cabinet that’s led by a GOP person like Romney, and I don’t think it’s going to be me in there, but thankfully, we have a lot of Americans who are ready and willing to serve.

In response to  Uma’s  question about folks wondering if she has her eye on 2016, Governor Palin responded:

I never know what will happen.  Never know, no.   This is America.  Anything is a possibility, and thank God, we have the freedom to choose what it is that  we will do with vocations.  and avocations.  We have the opportunites, you know,  nowhere else but in America.

The next question was from Terrence on Twitter asking if we would be seeing the “big blue bus” this summer.  Uma said that a lot of folks loved the bus tour.  Gov. Palin responded:

We loved that big blue bus!  We had just a blast on that One Nation Tour.  I don’t know, maybe  this go-round, we’ll do something a little more Alaskana.  Maybe Todd can take his little Piper Super Cub bush pilot airplane off the skis and floats and put it on wheels, and maybe we’ll wrap that and travel around the nation, talking to Americans about how wonderful and exceptional this country is and how to kind of save this country via that Piper Super Cub.

Uma asked if she would do something along those lines before the election.  Governor Palin replied:

I would love be able to continue to be out there talking to good hard-working Americans who understand what our foundation is.  You know, our economy is built on basically these two tenets:  national resource development opportunities, seizing those responsibly, and expecting reward for work ethic.  Those two things combined built the foundation of our economy, and we’ve got to get back to that in order to save our economy.  So talking to Americans, hearing their ideas, sharing ideas with them along those lines – it’s refreshing, it’s healthy, and hopefully, it helps lead to some productive and constructive conversation and solutions in our country.