SEE IT – Complete Video of Speech and Q & A Session!
http://us4palin.com/women-lead-video-sarah-palin-hot-news-pictures/ 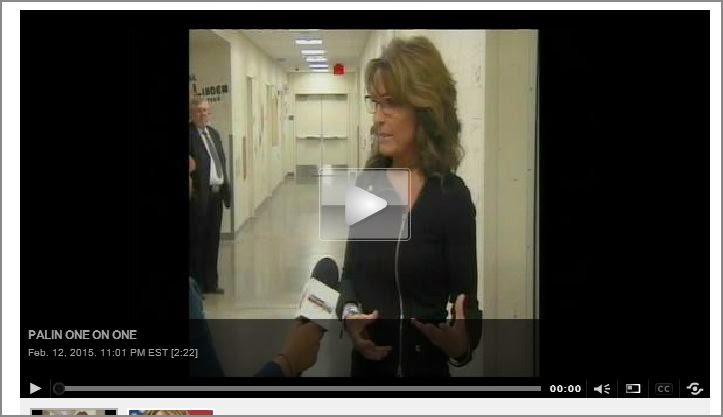 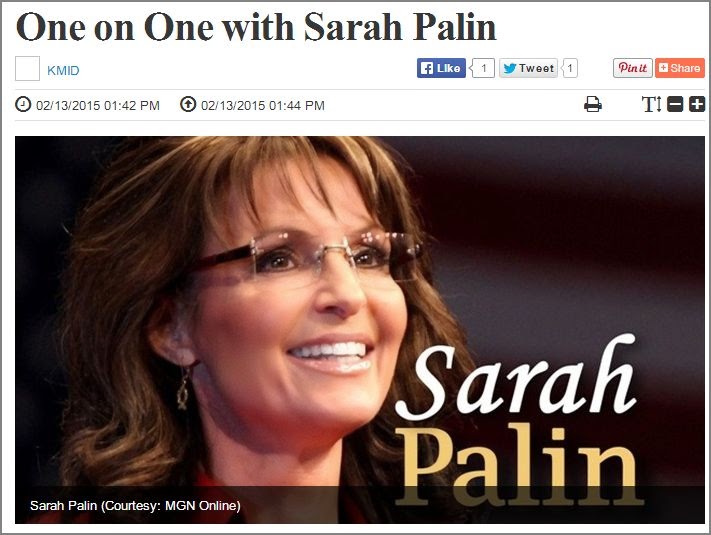 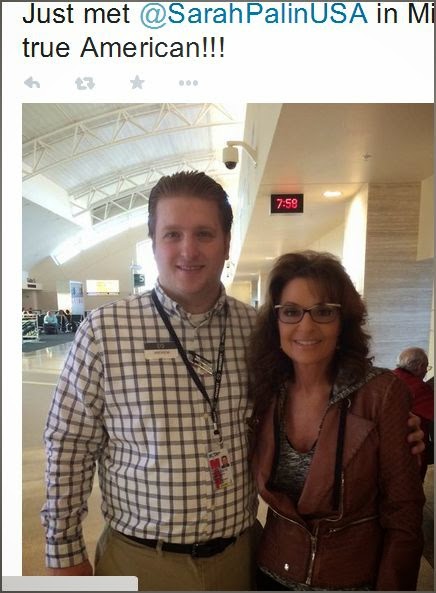 Sarah Palin Exclusive One on One

Palin's visit to West Texas was part of the John Ben Shepard Institute's Leadership Series, which aims to keep the Permian Basin in the national conversation.

According to Jaclyn Denny, Senior Program Coordinator with the Institute, the people that are brought in are names they think provide something special to the community.

"We bring names that we admire and that we think will make a difference in our community," Denny said.

The lectures are free and open to the public.

Palin supporters, like Shirley Raymond showed up to hear her speak because she believes Palin has a valuable message to share, and it's one that America needs to hear.

"She's down to earth like Texans and she's got wisdom beyond her years." Raymond said.

The lecture focused on the topic of women's role in leadership, examining some of the demands and characteristics of leadership in today's world.

"It's ingrained in me, the acknowledgment that women have awesome opportunities in America to do whatever we want to do," Palin said.

According to Palin, growing up in Alaska helped shape her idea of women and men standing on equal footing.

"There's a lot of independent spirit up there, and there's an expectation growing up that the girls are gonna work as hard and the boys. And then the women are going to work as hard as the men, just in order to survive some of the conditions up there," Palin said.

Palin says there's no limit to what woman are capable of achieving and it's a message she hope to pass on to the younger generations.

"I'm hoping that for the younger generations they know that nothings stopping them," Palin said.


Palin was the center of attention at the Wagner-Noël Performing Arts Center on Thursday evening. She spent the first half of the roughly 90-minute event speaking freely on the aforementioned topics, and then spent the last half answering answer questions asked by Bob Brescia, executive director of the John Ben Shepperd Public Leadership Institute and Pat Canty, publisher of the Odessa American.


Even after receiving flak for her speech at the Iowa Freedom Summit in Des Moines, Iowa, Palin still used a Martin Luther King Jr. quote that was cited many times in critical articles about the speech, all for the sake of pointing out peoples’ distrust in national politics.
“‘And so we must,’ he (King) said, ‘strengthen our backs and work for our freedom’,” Palin said on Thursday. “’A man can’t ride you unless your back is bent.’”
But Palin won the crowd over when she uttered her famous “drill, baby, drill” catchphrase when discussing domestic vs. foreign oil production, also noting that the U.S. needs to quit “bowing down to foreign countries.”
Palin’s ferocity and unabashed tone complimented her answers relevant to the theme of the lecture, when the theme finally came about through moderator and audience questions. Palin revealed that she views being a mother, not a former vice presidential candidate, not a former governor of Alaska, as her legacy.
“It (her legacy) would have to be about being a mom,” Palin said. “Speaking of political incorrectness, I’m sure that those that consider themselves feminists just cringe at such a thing when I talk about it.”
Throughout the night, Palin would switch back and forth between skewering and complimenting. So after her attack on feminists, Palin complimented Texas women, or “cowgirls,” saying they understand what it takes to make it in tough conditions.
But, when asked an audience question about examples of young, women politicians on both sides of the political spectrum that she respects, Palin sidestepped the question, saying she can list a lot on one side but did not do so.
It was Palin herself, through her demeanor and confidence, but not with her answers, that addressed the topic of women showing modern leadership.
And to one Odessa resident who attended the free event, she had a glowing impression of the JBS guest.
“I like (Palin’s) outlook, I like her platform, I like her,” attendee Glendis Brooks said.
Read more: Palin skewers Obama, national politics, media in Midland visit - MRT.com: News http://www.mrt.com/news/article_a7f502a4-b33b-11e4-96e7-afddb61aaaac.html#ixzz3RbgyDDcc Under Creative Commons License: Attribution
*************************************
Herald Online link
Photos of 2015 NAPE Expo Day 1 Available on Business Wire’s Website and AP PhotoExpress

Read more here: http://www.heraldonline.com/2015/02/12/6794993/photos-of-2015-nape-expo-day-1.html#storylink=cpy
HOUSTON — PHOTO 1: Former Alaska Governor Sarah Palin kicks off NAPE’s Thursday festivities during a Q&A session with Carl Campbell, Chairman of the NAPE Advisory Board, at the annual Decision Maker’s Breakfast. Palin shared insights gained from her political career and addressed the importance of the energy industry to the U.S. 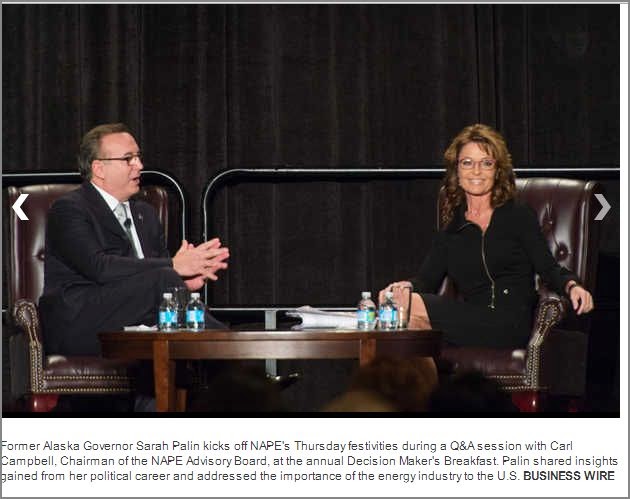 Posted: Thursday, February 12, 2015 11:27 pm
By Ruth Campbell|rcampbell@oaoa.com
Before a near-capacity crowd at the Wagner Noël Performing Arts Center Thursday, former Alaska governor and GOP vice presidential nominee Sarah Palin said people in Texas and across the nation are in a position to lead, not those in Washington, D.C.


Palin said the country is suffering from a dire lack of good leadership, something that will be paramount in the next presidential election.
What’s right in Washington, Palin said, is our history. The country America was built on an expectation of a reward for hard work and development of our natural resources, Palin said.
But Washington is broken. “It’s amazing what they’re taking away from us in terms of taxes and resources and they are wasting and hiding,” Palin said. “… We don’t have to put up with it.”
She said people need to be informed about the challenges facing the nation, work hard to elect candidates they believe in, hold them accountable and remind them that the people are the boss and we won’t tolerate the “shenanigans” going on.
If we keep going the way we are, she said, we’ll be bankrupt and no longer a sovereign nation. “We’re already on the brink now. That’s why 2016 is so important,” Palin said.
Growing up in Alaska, Palin said people had to be tough to survive. “Men and women are expected to work equally as hard. Growing up there with that independent spirit, if I have faced those barriers, consciously or unconsciously, I have ignored them and busted through them and not taken the time to whine …,” she said.
Palin, who said the title she’s most proud of is mom, added that women are busy, but if they had wives, they could take more on.
Asked by Brescia if women should be placed in combat roles in the military, Palin said if a woman is equal to a male soldier or any person in the military, she doesn’t see why wom­en couldn’t serve in that role. On the other hand, she said, men and women are created differently and she wouldn’t want to see standards changed.
“Men are stronger physically; mentally, no question (women are stronger). Out in the field, it’s hard for me to imagine that women would be on par with men” due to the physical nature of being in battle, Palin said.
Women, she said, are detail oriented. “We don’t like to waste time. We want to get the job done. Maybe I’ve been seen as impatient. It’s really just applying common sense, seeing the end game and bringing people together to get the job done,” Palin said.
Having spoken about the importance of grooming leaders for tomorrow, she said kids can pick up on the political brutality in the country.
“There is so much division,” Palin said. “The media lies about people. Look at what’s going on at NBC (and the revelations about anchor Brian Williams). I think young people pick up on that, too. That’s why I mentioned distrust of the media. There are things we can do about that, though. We can instill in young people that patriotism is a good thing.”
“We cannot be afraid of talking about real history, true history. We don’t have to sit back and let those who are so radically left take over,” Palin added.
She said people don’t have to idolize Hollywood stars. Kids can be taught about what the founders went through in creating “the charters of liberty” and emulate that history.
Asked who she would want to have a lengthy conversation with, she chose President Abraham Lincoln. Her other two favorites are George Wash­- ington and Ronald Reagan.
Reagan is someone she admires for his ability to find common ground with Democrats during his tenure as president on items like Social Security. She contends Social Security will go broke in 10 years. Those in office are kicking the matter down the road, and political insiders like the contention, preferring to scare senior citizens.
Palin pointed out the dangers of runaway national debt, national security and the need to repeal Obamacare and replace it with something market driven and patient centered.
Many of those who attended the event were big Palin fans and shared many of her views, applauding during her remarks and in reaction to her answers to questions.
Brenda Schwartz drove all the way from San Angelo to see Palin.
“The reason I’m here is because Sarah Palin is one of the few politicians I halfway trust. She seems to be all-American and for American and that’s what we’re for as American citizens,” Schwartz said.
Brad Burt of Big Spring drove out because he, too, is a Palin admirer.
“This country would have been a lot better off if we’d elected John McCain and Sarah Palin in 2008 …,” Burt said. Republican Arizona Sen. McCain was the presidential nominee and Palin was his vice presidential pick.
Jack Ward of Odessa said he “just loves” Palin and he shares many of her views on oil drilling and gun rights.
“We’re just here to support (her),” Ward said.
Brescia said former first lady Laura Bush will be the distinguished lecturer in October.