Palin To Put Supporters And Haters Out Of "Will She Run" Misery By July?


For the Palin hate industry and equally for the dedicated supporters of Governor Palin the RNC announced potentially devastating news ;

"The Republican National Committee is announcing plans to hold nine presidential primary debates, with the first just seven months away. RNC officials reported Friday the first debate is scheduled for Ohio in August."
What this means to both groups is either the end of lucrative page clicks for the former and tears of exasperation for the latter or exhilaration, for vastly different reasons of course, in both camps.
To even think that the Palin hate industry e.g. the likes of the execrable "Wonkette" (whose stock in trade is glimpses of the editor's bosom to titivate the sites immature demographic) actually have any thoughts about the policies Gov Palin espouses is of course ludicrous. The cottage industry has run for 6 years throwing red meat to the, often unbalanced, readership to reap the financial rewards of page views.
In the 2012 GOP presidential primaries run-up Governor Palin kept all and sundry guessing right up to October 5th 2011"[which ] ends nearly a year’s worth of media speculation about her political aspiration."  This time around, and being utterly realistic, the best the media speculation and blog for profit gang can do is squeeze about 6 months maximum out a possible Palin run. With the first debate set for August if Palin is not on the stage in Ohio with all the others who have declared then it can hardly be expected that there would be any credibility to a run held out to supporters subsequent to the first debate.
To keep speculation going after August would be unfair to those who have put themselves forward, to her legions of supporters and to the GOP which, rightly, would prefer the focus to be on the declared candidates. I believe there was absolutely no question that Governor Palin was seriously and prayerfully considering a presidential run in 2012. To ascribe a mercenary consideration to her long period of activism and her bus tour gives a terrible wrong to the sincere and dedicated character of Palin who was quite clearly conflicted right up till her final decision.
It is that sincerity of character which will, I believe, lead Palin to announce one way or the other well before, or at the very latest, this July. Most certainly her current schedule allows for numerous major venues to make such an announcement and CPAC Feb 25-28, should she attend, would be an outstanding arena-one would feel sorry for all the other attendees with the air utterly sucked out of the room subsequent to any such announcement.
Not only would the mad blogs, the MSM and the Palin blogs and supporters, have to face a new reality should she declare, but so too would the potential candidates from the conservative ranks. Senator Cruz, who famously advised "I would not be standing here if it were not for Sarah Palin" would, surely, have to consider his position in respect of a potential run. His polling support ranges up to the 7% mark and for Governor not to be the recipient of all or most of it should she run would appear manifestly unfair-certainly a call for Senator Cruz to endorse Palin would quickly ensue post announcement.
Surely too, Santorum and Huckabee might have to undergo a period of introspection? Neither has formally declared but both have made clear indications they might run. If Palin declares both might consider what is best for the GOP-and especially for the conservative and more specially the Christian conservative movement.
If both ran in Iowa and South Carolina and so split the conservative vote that a RINO took those states what would have been gained? In light of a declared Palin candidacy they might consider their chances and whether most of what they support would be best achieved by declaring their endorsement of Governor Palin.
Thus whilst a whole cast of characters, Palin supporters and opponents, will be put out of their waiting misery one way or the other shortly, it seems a whole new cast of Palin affected characters would appear. If she declares then the GOP establishment, the other prospective conservative candidates, the Bush's and Christie's and Romney's would have to consider their positions vis a vis attacking the governor as would of course the Democrats.
The next 6 months will most certainly be interesting to say the least, and if she declares the subsequent 18 months, commencing with a media explosion on day one, will be fascinating for all concerned.
Gov.Palin does video link to South Carolina and shout out to Iowa on her FB page.Whatever can it mean?? http://fb.me/75xo2B2q9
Video from Gov.Palin:Sold Out in South Carolina!Overflow crowds independent teaparty Americans packed Myrtle Beach, https://www.facebook.com/sarahpalin

The Palin supporters "Earthquake" group are most certainly clear where their preferences as far as Governor Palin running are concerned with these billboards put in place in Des Moines just prior to her address to a conservatives conference. 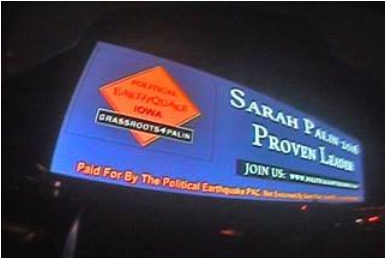