Updated figures for the top two:

From Speech At A Time For Choosing By Gary Jackson

By Gary P Jackson
On Wednesday, Greta put up a poll asking her readers who they thought, at this moment, was the leader of the Republican Party. Readers responded by choosing Sarah Palin by an overwhelming margin over the rest of the field.
Reading the comments it’s pretty plain that many feel Sarah could have fared far better against President Obama than Governor Mitt Romney did. Judging how well Sarah’s hand picked candidates for office did, vs how those in the standard GOP mold under-performed, it’s not much of a stretch to think Sarah herself would have done well and likely led the party to victory.
It’s also clear, reading those comments, that Greta’s readers would like to see Sarah Palin run for President in 2016. It’s way too early to speculate what Sarah will do, and it’s probably best not to speculate until she, herself says something, but I’m one of those who is 100% on board with the idea of a her running.
We need strong leadership from a GOP candidate, and for the last two elections, we’ve had no leadership at all. Timidity cannot defeat evil, and we are staring evil right in the face. We need a warrior at the helm.
Here are the results of the poll as of this afternoon:
Governor Sarah Palin 37.76% (2,137 votes)
Senator Marco Rubio 17.62% (997 votes)
Speaker Boehner 13.91% (787 votes)
Congressman Paul Ryan 8.54% (483 votes)
Governor Romney 8.41% (476 votes)
Someone else 6.94% (393 votes)
Governor Chris Christie 3.64% (206 votes)
Speaker Newt Gingrich 3.18% (180 votes)
I’d be curious to learn why Speaker of the House John Boehner rates so high. Maybe readers took the question literally, as Boehner is the highest ranking Republican in office. It’s just that seeing Boehner and “leader” mentioned together somehow seems wrong to me.
Readers would rather see someone, anyone besides Chris Christie or Newt Gingrich leading the party. I agree.
The poll isn’t scientific in any way, but Greta’s blog is popular with a wide range of people from all points of view, and likely represents the feelings of many, if not most of the GOP faithful. 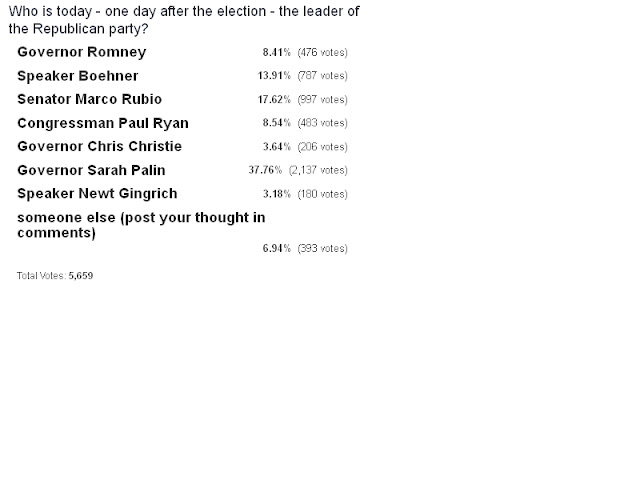