Reprinted from Sarah Palin Information Blog (A site with ALL things Palin).Unprecedented views of this post.Shows keen interest in the concept

.
The article was written at a time when it was considered that Palin might make a run for the GOP nomination in 2012 and, of course, for the presidency should she have been successful at gaining the nomination.
Given the voting history of the states assigned to Palin in the Electoral College map it was entirely feasible that she could have won the required number of EC votes to have reached the 270 needed to be elected (irrespective of the popular vote).
The article garnered a bit of interest at both sites and readership declined precipitously (and of course understandably so) after Palin declared she would not be a candidate in October 2011. But, astonishingly and interestingly, the readership of the post has increased strikingly!
Commencing with an uptick in May of this year and accelerating to over 5,900 page views for August and September combined, 4,500 for October, and almost 23,000 so far in November, as per the analysis above from the SPIB site, there have been almost 35,000 views at that site alone.   There were 20,535 views for November 5 through November 7.  Between the 3 sites where it has been posted, there have been an astounding total of over 60,000 views!!   It is, by far, the most viewed post ever on these sites.
The article had not been front page on either site since it was first posted, so for well over 20 thousand combined views to have happened recently in the last two and half months means that people are searching for the article. Perhaps and possibly more likely, they search for an Electoral College map pertaining to the Obama vs Romney campaign, and upon seeing the link to the post, are clicking on it.
This raises the question as to why that is happening. Does it mean that people are interested in “what might have been” and viewers wanted a comparison to the current Electoral College maps which showed President Obama with a substantial lead? Were Republicans looking towards 2016 should Romney have lost and judging whether Palin would be better placed to win under those circumstances?
The fact that there is such interest in the possibility of a Palin campaign – when she was not running and now that the election is over – shows, indisputably, that there is huge interest in the possibility of a future run to the degree that people wish to see exactly how a Palin run could bring victory. The map, in my opinion, shows a more than viable path to an election win for Palin.
Here is the original post from December 2010:

The final 2012 Census Bureau Electoral College adjustments are now in and we can take a preview snapshot of what the most likely result will be for Sarah Palin.
With the population shifts and a net Republican states gain of 6 electoral votes over the 2008 allocation Palin would assume the presidency with an eleven electoral vote margin.
There is room therefore to lose Colorado or Iowa and still win comfortably. 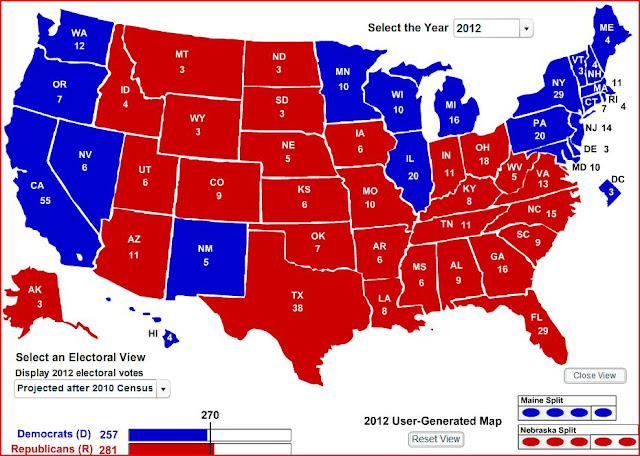