Now that Hollywood leftists have awarded themselves, and especially Julianne Moore, who behaved with such poor dignity in accepting her hollow award, Emmy's for their Palin hatchet job "Game Change" they should strike some balance.

Monica Lewinsky is stated as writing her story about her liaison with President Clinton, which will surely be a big seller. As such it will deserve being made into a movie and who better to play Monica than Moore?

There would be some steamy scenes Moore could really get her teeth into to show off her acting ability.

The producers of "Game Change' advised there was no hidden leftist agenda (the fact that it came out just when Palin was thought to be making a presidential run being pure coincidence).

They should end the speculation of Hollywood leftist bias by making a movie about the Clinton/Lewinsky affair.

A possible title might be "They were close but no cigar"

The Emmy's have gone, oh so predictably to the leftist crew who created the Palin hit piece "Game Change".

Julianne Moore, ungraciously gets a "thumbs down"dig in at Palin and says she is now "validated" but the only thing "validated' is the proof of the leftist hatchet job on Palin.As if the kudo's from leftist Hollywood is a validation of anything except their agenda.

Here's the dignity of leftist Moore 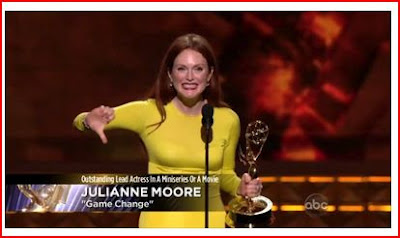 The actress won the Emmy for outstanding lead actress in a miniseries or movie, and she told the audience that she felt "so validated since Sarah Palin gave me a big thumbs down."

Although the left is awarding and rewarding itself, the last laugh is on them surely. The production was clearly designed to hit Palin during her 2012 presidential run. That that did not happen must have created groans of disappointment, and hopefully big losses for the production company.

Should Palin decide to run four years from now the actual events, and the fictional events created by Hollywood will be a long forgotten, irrelevant memory.Palin will have the last laugh as the media, including McGinniss et al, and their enablers amongst the Dem's and Hollywood, will have shot their respective bolts with no "scandals" to dredge up about Palin.

Here are some links to the truth behind "Game Change courtesy of Conservatives4Palin commentators;

"I briefly served as a volunteer speechwriter on the McCain-Palin campaign in 2008. I was never part of the inner circle, and even if I had "dirt" to dish, I wouldn't dare violate the confidentiality agreement I signed - even though that hasn't stopped some former McCain campaign aides from publicly blaming Gov. Sarah Palin for everything that went wrong.

But here's the truth about the McCain-Palin campaign, which HBO's upcoming "Game Change" film attempts to shroud in fanciful anti-Palin fiction: Palin carried the campaign.

She would have led the Republicans to victory had it not been for the September financial collapse and McCain's disastrous decision to suspend his campaign so that he could vote for the TARP bailout in Washington. After the bailout vote, support for the Republican ticket collapsed. "

'More 'Game Change' Fallout: 'Staffers talk just to save their asses'
From the article:

"Well, now we know who one of those bomb-throwing cowards is, Steve Schmidt, who HBO portrays as the calm, cool, reasonable hero of the film.

In real life, however, it's no secret that he was the "super-genius" behind ("Schmidt pushed for going all in") the moment polls prove really lost the 2008 election; when Senator McCain foolishly decided to suspend his campaign and run back to DC to save the economy. "

'Whom Do You Believe? HBO or Gallup?'

She’s the only reason they had a fighting chance up until the time McCain suspended his presidential campaign in late September.

Some were intrigued as to how McCain’s decision would play out in the polls, but once he suspended his campaign in late September he never recaptured the lead he enjoyed with the breaking news of recruiting Palin.

It was downhill from there."


More 'Game Change' Fallout: 'Staffers talk just to save their asses'
From the article:
"By my count, including Governor Palin, who's gone on the record with various statements and her own fact-checked-to-death autobiography, "Going Rogue," we now have 11 people -- 10 of them on the record -- who were there during the campaign and who vigorously and openly dispute the malicious way in which the Governor is portrayed in HBO's "Game Change."
The most important thing to remember, is that a few of these individuals did speak to the "Game Change" authors and screenwriter, but rather than take the word of those willing to speak out in the open, those writers CHOSE instead to take the word of those who refused to go on the record.
If you have nearly a dozen people, either telling you or willing to tell you the same story openly, why then would you choose to go with bomb-throwers living in the shadows.That's a rhetorical question.
Well, now we know who one of those bomb-throwing cowards is, Steve Schmidt, who HBO portrays as the calm, cool, reasonable hero of the film. In real life, however, it's no secret that he was the "super-genius" behind ("Schmidt pushed for going all in") the moment polls prove really lost the 2008 election; when Senator McCain foolishly decided to suspend his campaign and run back to DC to save the economy.
Yes, it was Steve Schmidt who "pushed" to have McCain charge off on a white horse without having any idea as to where he was charging off to. McCain went to DC without a plan, looked feckless and reckless, and never recovered. "Game Change" blames the campaign's loss on Palin, but that's a total and complete fabrication. "
http://www.breitbart.com/Big-H...

Top 10 Lies of HBO's 'Game Change'
From the article:
"Game Change" is pretty easy to deconstruct. At its core, it's a left-wing project designed to make one of their most hated political enemies toxic. They used people with an axe to grind to legitimize the story they want viewers to believe and help push their agenda. They also have no problem lying.
Honestly, it was difficult to narrow down this list because there were so many fabrications and distortions throughout the film, but here are the top ten lies produced by HBO."
http://www.breitbart.com/Big-H...
Posted by M. Joseph Sheppard at 3:28 PM