I wrote the article below in August 2012 which sets the historical basis for a viable third party when Governor Palin indicate that such a possibility was a viable one. The events in Mississippi where a conservative challenger to a sitting pork republican won the primary only to be defeated by Dem crossover votes has reignited third party passions.

In the last week Governor Palin has further indicated her, what appears to me to be righteous disgust,which is is not to strong a word, about the current political scene.

She advised that unless the GOP establishment took action against the Obama administration's "madness” on America’s southern border with Mexico. she would seriously consider leaving the party;

And now seemingly in despair over the uselessness of the GOP:LINK

Well, if Republicans are going to act like Democrats, then what's the use in getting all gun hoe about getting Republicans in there? We need people who understand the beauty of the value of allowing the free market to thrive, otherwise our country is going to continue to be over-regulated, drive the industry away, driving jobs away. We're going to be a bankrupt, fundamentally transformed country unless those who know what they're doing and aren't going along just to get along with those in power, being today the Democrats, that does no good. So, yeah, if Republicans aren't going to stand strong on the points in our platform, then it does no good to get all enthused about them any more."

Sarah Palin said Saturday a third party option is not beyond the realm of possibility.

When asked if she would consider creating a third party if neither Gov. Romney nor President Obama would budge from their current positions on a variety of issues, Palin left open the door. "Look what happened in the mid 1800's. The Whig party went away and the Republican Party surfaced. Because the electorate got sick and tired of the party fighting for power and not doing the will of the people." Palin went on to say history could repeat itself. " If history is an indication it is a possibility," she said. "If the Republicans don't remember what the planks in the platform represent ... that is opportunity to prosper and thrive in the most exceptional nation in the world. We do that through a free market.

If the Republicans become like the liberal left and democrats, I wouldn't be surprised if history didn't repeat itself."

If Mitt Romney wins and institutes policies which are no different from the Obama administrations, and the 2014 mid-terms are a similar expression of Tea Party disgust as was the 2012 landslide, then a conservative third party for 2016 is highly probable. Given the near impossible odds against unseating a sitting president at a convention, as the example of Taft and Carter, who were highly unpopular proved as they both withstood challenges from hugely high profile opposition (Roosevelt and Kennedy) it would be foolish for the Tea Party to take that route.

On the other hand, if Romney loses this November (and the "progressive" left is unhappy with Obama's second term) and the establishment tries to foist another similar candidate (or heaven forbid, Romney once again) on the rank and file in 2016, then yes, by all means, let the Beltway have their way. Then the Tea Party, in coalition with perhaps the Paulite's could well start a third party.

Even with massive enthusiasm behind such a movement, history shows that victory first time up would be unlikely (although a massive economic dislocation would prove an exceptional catalyst). Teddy Roosevelt crushed the Republican establishment in 1912 but lost heavily to the Dem's, La Follete had substantial enthusiasm but did poorly in the Electoral College, as did Perot and George Wallace.

The new Republican Party lost in their first outing, whilst performing credibly, and after the next election became the major force in presidential politics for the next 50 years. Thus the Whigs,who displaced the Federalists, and the Republicans prove that a new party can, if there is a major social shift, not only do well but can become a dominant force.

Below are illustrations of how a new party could eclipse the GOP as it now stands and win in 2016, although 2020 in a straight two party race would seem more likely. The major question would be whether, if the new party did well but did not win, it could stay around for another run unlike Roosevelt's Progressive Party.Thus those who might consider a new party would have to also consider the massive commitment it would require.

The question arises, would a third party run give it a realistic chance of winning the presidency in 2016?

The answer is, yes if the environment if right. If by November 2014 the economy is not better than now, or has turned down further, and if  Romney were president, then a three way vote split is quite possible.

This approximates the three party (Dem/Bull Moose/GOP) 1912 election. That election was prevented being thrown in the House because sitting President Taft only carried two states, but split the vote with Roosevelt 23% to 27% denying Roosevelt enough electoral votes to deny Wilson an outright win.

Whereas the scenario below, realistically for the scene over 100 years later, shows the GOP candidate winning enough electoral votes to ensure no candidate had a majority.

Given a genuine conservative, like Palin, headed a mass movement third party run, and a split in the left was exacerbated to the point that the "Progressives" stayed home on election day, and the Tea Party turned out en-mass, then the map below (with the prospective third party states in beige) is a very plausible result.

Given it would be unlikely that the GOP would lose control of the House in the 2012/14 elections thus, on the most recent analysis, the GOP would have a majority of the 50 states votes  based on caucus outcomes when balloting. If Romney were president and the Dem's controlled the majority of state delegations then 2020 would be the year of transition

This scenario played out before. In the election of 1824 Andrew Jackson finished first with more electoral votes than John Quincy Adams, William Crawford came third and Henry Clay fourth. With Clay eliminated he threw the support of his states to Adams, who was duly elected, based on the fact of his having the majority of states.

The full constitutional scenario is set out below the map."Undecided" means third party  and the map represents a 2016 scenario disregarding Obama as the Democratic candidate. In the ensuing map from 1912 it clearly shows how a sitting president can only carry two states as did Taft so the scenario is entirely plausible. 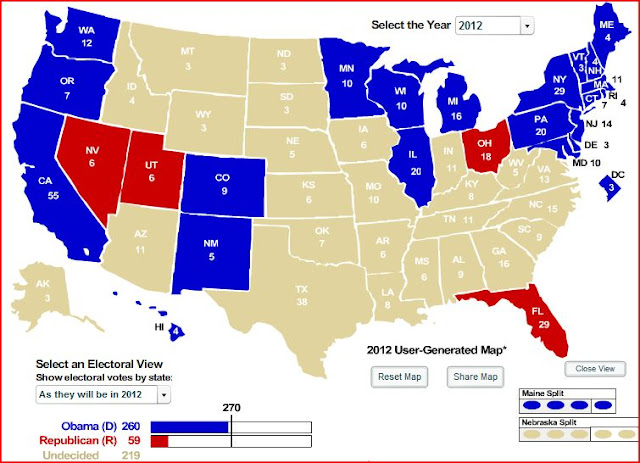 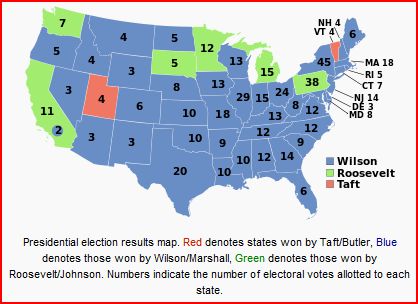 The constitution is very clear on the matter. Article 12 states, inter- alia:

"The person having the greatest Number of votes for President, shall be the President, if such number be a majority of the whole number of Electors appointed; and if no person have such majority, then from the persons having the highest numbers not exceeding three on the list of those voted for as President, the House of Representatives shall choose immediately, by ballot, the President. But in choosing the President, the votes shall be taken by states, the representation from each state having one vote; a quorum for this purpose shall consist of a member or members from two-thirds of the states, and a majority of all the states shall be necessary to a choice."

Based on the current composition of the House, and if voting went strictly on party lines, with no vote switching or abstentions in states with a close proportion of Republicans and Democrats, the Independent (or third party) candidate would be chosen on the first or second ballot.