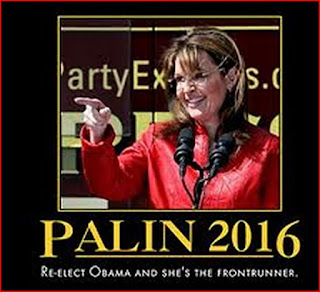 
The left continues with their big lie that Palin cost McCain the 2008 election. This is often seen in comments from so called "Republicans" along the lines of "I was going to vote for McCain but when he chose Palin I switched to Obama" and similar such nonsense.


Here are are the unbiased, unvarnished facts (with links to the full reports in red) from respected professional polling firms.The major issue was the economy, the Lehman brother's collapse and McCain "suspending" his campaign.


Palin's addition to the ticket was a significant plus factor which  kept McCain as close as he did until nothing could save him as the economy tanked and the bail-out inflamed passions.

PEW RESEARCH CENTER FOR THE PEOPLE &amp; THE PRESS November 5, 2008

Despite the premise of “Game Change” – that Sarah Palin cost John McCain the 2008 presidential election – Gallup polls prove HBO’s assertion categorically false. Palin wasn’t the reason the Republicans lost the election. She’s the only reason they had a fighting chance up until the time McCain suspended his presidential campaign in late September.

Gallup polls from the last presidential race prove that once Palin joined the ticket on Aug. 29, 2008, McCain’s ratings steadily climbed to a point where the Republican ticket even outshined Democratic Sen. Barack Obama.
In the two weeks before Palin joined the McCain ticket, the Arizona senator drifted in the low 40 percentile range, mostly around 41, 42 and 43 percent, while Obama held as much as an 8 point lead at about 49 and 50 percent. Four days after Palin joined the ticket, however, McCain’s numbers climbed to 45 percent and Obama’s sank to 47 percent, narrowing the gap significantly from eight points to two.

Between Sept. 4-6, McCain and Palin actually overshot the Obama ticket by 3 percent with the Republicans in the lead at 48 percent and the Democrats at only 45. McCain consistently held that lead until Sept. 15, and then the candidates balanced out with Obama enjoying a mere three-point lead, and no lead at all from Sept. 22-24, when the numbers were tied at 46 percent.
[...]
Some were intrigued as to how McCain’s decision would play out in the polls, but once he suspended his campaign in late September he never recaptured the lead he enjoyed with the breaking news of recruiting Palin.
It was downhill from there.
McCain’s campaign was taken out of suspension, but it never actually got back off the ground. From then, the gap between McCain and Obama only widened, leaving the Republicans at a severe disadvantage. McCain’s numbers remained steady around 42 and 43 percent throughout October, but Obama’s continued climbing, and by October 31, McCain’s standing had dropped to 40 percent and Obama’s had reached 53 percent - a devastating 13-percent gap.
(Gallup article from SPIB-Dr. Fay)